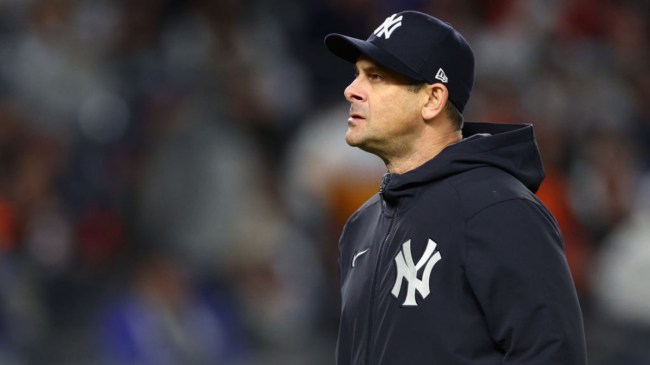 New York Yankees fans were once again met with disappointment at the end of the team’s 2022 season. The team was running through the league on the way to the best record in the MLB in the first half. Then things got rough in the second half of the season.

The Yankees fell behind the Houston Astros in the standings, surrendering their home-field advantage in the playoffs. That had fans worried heading into the ALCS. It didn’t end up mattering as the Yankees lost both of the home games they got to play on the way to getting swept by the Astros.

The sweep has many wondering how exactly to get the team over the hump after they’ve failed to even reach the World Series since they won it in 2009.

It seems Mariano Rivera has the answer. Today, the legendary Yankees closer revealed that if he was in charge, he’d fire Aaron Boone.

Mariano Rivera spoke candidly about Aaron Boone and the Yankees:

"When things don't come out the way we want them to, all of the fault goes on the manager. Somebody has to pay the price and we won't put that on the players." https://t.co/3ukglQxku2 pic.twitter.com/5wHPya1CAa

If I’m the owner, Aaron Boone wouldn’t stay… when things don’t come out the way we want them to all of the fault goes on the manager and somebody has to pay the price and we won’t put that on the players..

Since Boone took over the Yankees, they have won the division twice, but they have struggled in the playoffs. They’ve been eliminated in the ALCS by the Astros twice, the ALDS twice, and the Wild Card once. The story that came out about the team’s motivational video also won’t help his cause with fans.

The Yankees seem to be planning to keep Boone despite the playoff failures.

There are reasons to believe that the blame should fall on the players more than Boone. There isn’t really much he can do about his star player going 1-16 against the Astros and the roster as a whole struggling. He was also without DJ Lemahieu and Andrew Benintendi against the Astros.

Still, Mariano Rivera doesn’t seem to believe that is enough reason for the Yankees to keep him around.