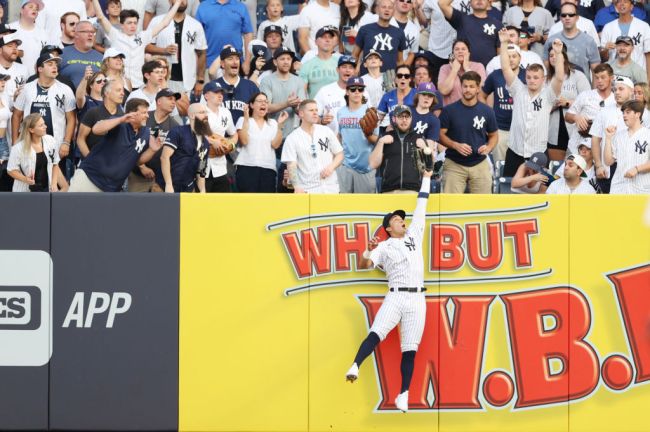 The New York Yankees have not had much going right for them recently, but they may at least have one positive come out of this week.

The Yankees came into tonight having gone 3-14 in the month of August, falling behind the Dodgers, Astros, and Mets in the race for baseball’s best record. Their offense has slowed down quite a bit since the ALl-Star break, only going over 3 runs in 1 of their last 10 games.

Their pitching hasn’t been much better despite their trade for Frankie Montas at the trade deadline.

Tonight, there has at least been a positive moment during their game against the Toronto Blue Jays. The Yankees once again fell behind early against the Blue Jays, but it could have happened much quicker if it weren’t for an impressive grab from a rookie.

On the first pitch of the game, Lourdes Gurriel Jr. got a hold of a fastball from Jameson Taillon and drove it towards the right field wall. Luckily for the Yankees, Oswaldo Cabrera was able to leap and make an impressive grab to rob Gurriel of a leadoff home run.

Cabrera has only been with the Yankees since Wednesday, but is already making an impact for the Bronx Bombers.

The home run robbery followed a strong second major league appearance from Cabrera yesterday. During Thursday’s game between the Yankees and Blue Jays, Cabrera went 2 for 4 with a double in a performance that provided some hope that maybe he’d be able to provide some kind of spark for the struggling Yankees offense.

Right now, the Yankees need all the help they can get as they try to stop their free fall and watch their division rivals creep closer and closer.