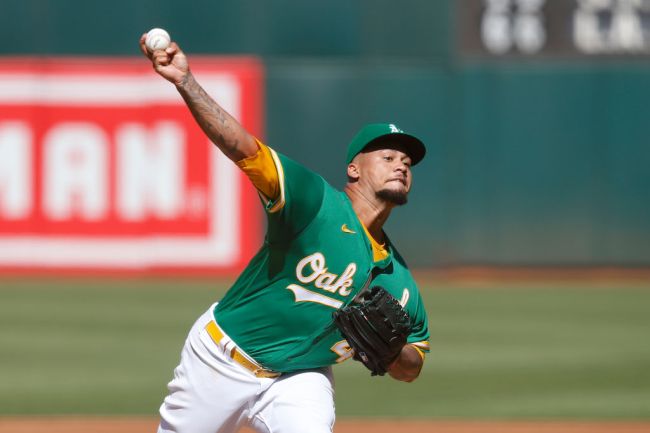 The New York Yankees have been busy ahead of the MLB trade deadline. They were one of the many teams linked to Juan Soto. They landed Andrew Benintendi earlier this week. Now, they have their sights set on a starting pitcher.

According to baseball columnist Bob Nightengale, with Luis Castillo no longer available, the Yankees’ top target is Frankie Montas.

Now that All-Star Luis Castillo is gone, making the #Mariners a playoff team, starter Frankie Montas of the Oakland A's is on the clock.
He is the #Yankees' No. 1 trade target.

The New York Yankees’ pitching staff has performed well this season. All 5 of their starters have ERAs under 4. Nestor Cortes even earned himself a spot in the All-Star game with his 2.48 ERA.

Still, the Yankees have seen their pitching fall short in the playoffs frequently in recent seasons and have every reason to want to make sure that doesn’t happen again this season, especially with Luis Severino currently dealing with another injury.

Now they’ve missed out on Luis Castillo and his 2.86 ERA and 90 strikeouts, so they’ll pursue Frankie Montas. Montas is certainly a strong pitcher, sporting a 3.18 ERA for the woeful A’s, but Castillo was really the prize to be won at this trade deadline.

Now the Yankees will just have to hope that adding Montas is enough to push them over the top after the other pitchers they’ve traded for at the deadline haven’t led them to a ring in recent years.