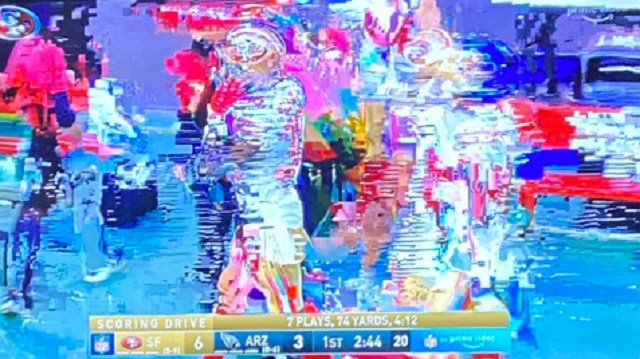 The NFL’s Week 16 slate featured a Saturday triple header but some fans aren’t happy about one of the games being made available exclusively through a streaming app.

Saturday’s Cardinals vs. 49ers matchup could only seen on Amazon Prime Video or on Twitch after the NFL granted Amazon exclusive broadcast rights for the game.

Unfortunately, some fans weren’t happy with the video quality of the stream and called out the NFL

Is anyone else watching potato quality football #NFLonPrime @amazon pic.twitter.com/3n6NhXEZme

Hey @JeffBezos #AmazonPrime #NFL this product is a disgrace. Completely unwatchable. Techmo bowl looks better than this shit. Failure. Spend some of that anti union money on infrastructure to stream nfl games instead of union busting. pic.twitter.com/XGlQMQyeaC

The picture and streaming quality Amazon Prime sucks so far for this game. It’s hard to explain, but it’s seems choppy, not fluid #NFLonPrime #NFL #SFvsAZ

Watching #AmazonPrime #NFL and the picture quality makes me feel like a 10 year old boy watching on my rabbit ear antenna TV. Didn't know picture quality this bad was even possible in the #5G age.

The video quality on the 49ers-Cardinals game on Amazon Prime is horsebleep. I know the NFL is trying to relate to different viewers and create new audience, but why do they have to tamper with quality instead of sticking with actual broadcast outlets that do this for a living?

I honestly hate the NFL putting a game on Amazon. The feed sucks, it's super choppy, and they've classed down a top product. This is not where NFL games should be aired #NFLonPrime

@NFL whose bright idea was it to stream a game on Amazon Prime??? Cuz so far this is what I’ve seen or maybe NOT seen…Poor quality of picture, frequent loss of signal, freezing of broadcast AND the color analyst is NOT pleasant to hear. Come on MAN!!!!! pic.twitter.com/LBMuFoAICe