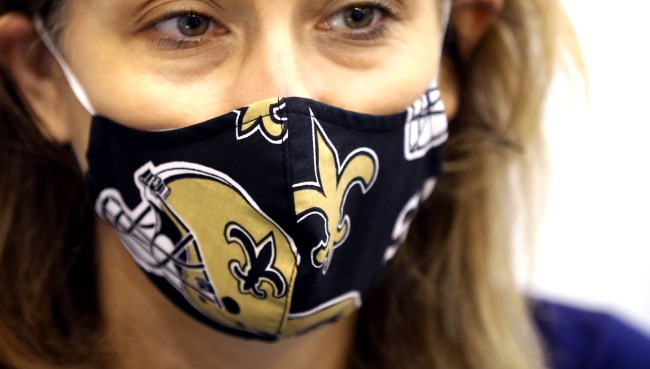 In a move that many expected, the NFL has announced that all fans who attend the league’s games this season will be required to wear masks.

NFL Vice President of Communications Brian McCarthy made the announcement on Wednesday.

For those wondering, yes, it is league-wide: fans at NFL games this season will be required to wear face coverings pic.twitter.com/D139KGKQ4r

While wearing a face covering won’t be an issue for many fans, especially those who reside in the Raiders’ Black Hole (which may or may not actually be a thing this year), there is sure to be much anger displayed by certain fans who will be against such a safety measure.

Heck, we’ve already got women urinating on the floors of Verizon stores over being told to wear a mask and men pulling guns in Walmart over the issue, so one can only imagine the hue and cry this move by the NFL will generate.

What’s that? It’s already happened? The moment the announcement was made? Of course it has.

We don’t care anymore. They lost millions of fans by choosing to disrespect our flag, our veterans and our country. After 49 years of watching, I won’t be anymore. #BoycottNFL

Wow first they allowed players to kneel on the flag and now this? NFL is out of touch!

You know what’s so great about this move. It magically highlights all of the people we need to avoid in life.

As for which fans will actually be allowed to attend games, that is a whole other question as different states have different rules regarding what kind of stadium capacity will be enforced in each city.

Raiders owner Mark Davis claims that if he has to deny any fans admission to his brand new stadium in Las Vegas, he won’t have any fans at all.

Meanwhile, down in Atlanta, the Falcons announced that the 70,000-plus seat Mercedes-Benz Stadium will have somewhere between 10,000 and 20,0000 fans at games.

Of course, not everyone was an idiot reacted negatively to the NFL’s mask news.

It’s so simple and easy to do. Wear a mask and watch the game. In cold cities people have their entire faces covered.

Whatever it takes to watch my team! @49ers pic.twitter.com/Iozx4iBFkm

Perfectly fine. I think people will wear full on hazmat suits to get out to games.