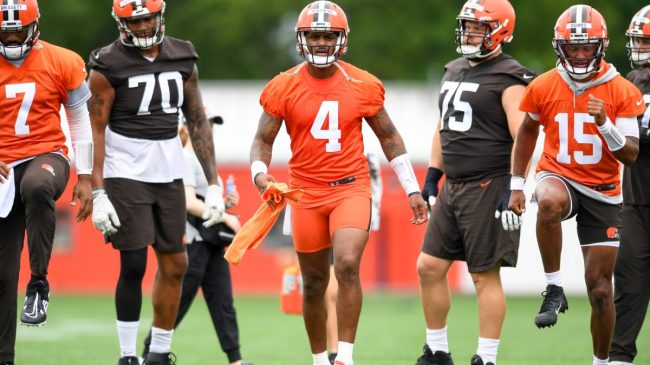 The NFL has taken a hard stance on its appeal of Deshaun Watson’s six-game suspension. After reviewing the findings of the hearing, the league bit back with a suggestion of its own.

Those findings from Judge Sue Robinson showed that the NFL “carried the burden to prove” that Watson violated three sections of the league’s Conduct Policy.

They’re now seeking an indefinite suspension, along with a hefty fine.

NFL insider Jeff Darlington first reported the details of the appeal, posting an update on Twitter.

“I’m told NFL is appealing for an indefinite suspension that would be a minimum of one year. But perhaps more significant given the structure of Watson’s contract, source tells me the NFL’s appeal will also include a monetary fine. Money is now a significant part of the equation.”

What Darlington reports essentially states that the league is not only looking for a lengthy suspension, but they’re trying to go after Watson’s massive contract, too.

The Browns set up the $230 million deal with the belief that he’d be suspended for at least part of the upcoming campaign. In doing so, they gave the passer a base salary of $1.035 million for his first season in Cleveland, with that yearly salary jumping up to $46 million a year in the remaining four seasons of the agreement.

He was also awarded an untouchable $44.965 million signing bonus.

When all was said and done, a six-game suspension for the 2022 season would cost Watson just $345K, a miniscule amount considering the size of the deal.

Now, the league is looking to suspend the quarterback indefinitely, with a minimum one-year ban, which would cost Watson his $1.035 million salary, and possibly more. They also want to tack on a substantial fine, which would negate that massive signing bonus the signal caller received in Cleveland.

With the NFL now looking to hit Watson in his wallet, fans are appeased.

yep yep get that money and get that man outta here https://t.co/JgQ8w73EOy

The initial suspension the arbitrator proposed, which would leave 99.9% of Watson's fully guaranteed contract untouched, was essentially a paid vacation for Watson. https://t.co/zykMutfNGv

Like I was saying earlier this week, league didn’t like how Cleveland tried to circumvent financial penalty for Watson with a “creative” contract. https://t.co/7h9Cl8EY5Z

The Browns tried to get too slick with Watson's contract https://t.co/sffeoLDY2j

A reminder that the way the Browns structured the contract remains a slap in the face to anyone with any semblance of a moral compass https://t.co/92SIYGNDX0

Deshaun Watson's agent, David Mulugheta of Athletes First, was playing with fire when he made that contract that paid Watson essentially zilch in salary this season. How could he have thought the Roger Goodell we've known for 15+ years would let that slide? https://t.co/muez95qSu2

A potential fine from the NFL, should they indeed go that route, is significant for this reason: Previously, under a 6-game suspension, Watson stood to lose $345k. Under a one-year suspension, it would've been $1.035m. Largely inconsequential relative to his $230m contract. https://t.co/BFvpTHdhgH