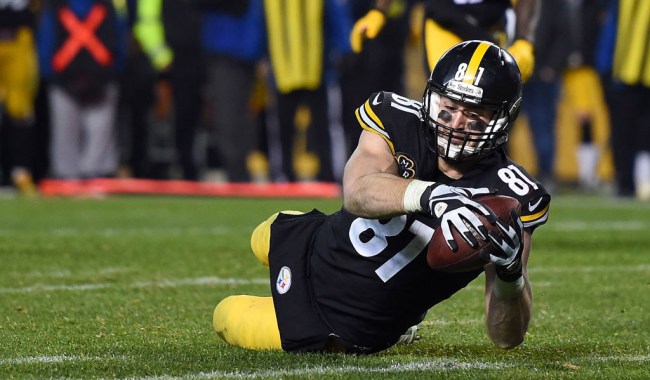 The NFL catch rule has been about as clear as my urine following a three-day bender. Harder to understand than my grandpa talking about the war with his teeth out. The straw that broke Goodell’s back was likely the Pittsburgh Steelers’ Jesse James go-ahead touchdown that was overturned in the final 30 seconds of their game against the Patriots in Week 15. You can offer Dez Bryant, Kelvin Benjamin and Calvin Johnson catches into evidence as well.

Well, it’s March 27, 2018 and the NFL has finally made strides in determining what constitutes a catch. NFL.com reports that league owners approved modifications to the catch rule for the 2018 season during the Annual League Meeting on Tuesday. The official results:

The catch rule passed by a vote of 32-0 #theyallcaughtit

Here are the new guidelines.

After much deliberation & input from coaches, players, @NFLLegends, & club executives, the @NFL Competition Committee will recommend the following language simplifying the catch rule at the Annual Meeting next week. pic.twitter.com/hJwH5YYBRK

The essential change to the rule eliminated the “going-to-the-ground” stipulation of the previous rule. Many expect to see an increase in fumbles with the new rule implemented.

“Every time, we tried to add language to cure a situation,” said McKay, president of the Atlanta Falcons “and that did not serve us well.

“We felt like the word slight was getting people caught up. It’s really loss of control. If you lose control of the ball, then you haven’t satisfied (the process). If you have movement of the ball but haven’t lost control of it, then you still have it.”

Added Riveron: “If we see total loss of control, that’s the way we’re going to rule it. But we understand there are situations where the ball is going to move. We have to see loss of control.”

Granted, this won’t do away with all the confusion in a super fluid game, but at least there’s a bit more clarity.