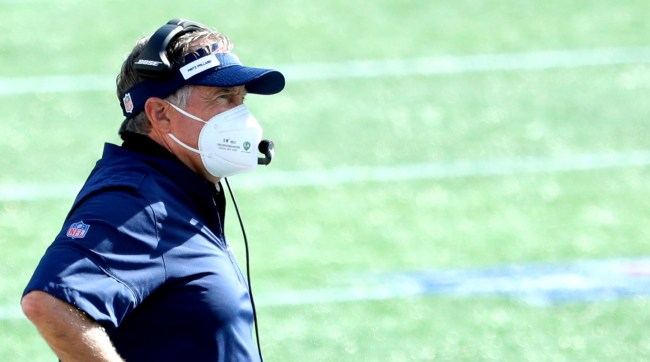 Mask wearing has been one of the most talked about topics three weeks into the NFL season. A number of coaches have been spotted not wearing masks or other face coverings properly on the sideline, a rule set forth by the league.

Following Week 2’s action around the league, Denver’s Vic Fangio, Seattle’s Pete Carroll, and San Francisco’s Kyle Shanahan were fined $100,000 each while each team was fined an additional $250,00 for not wearing masks properly. Jon Gruden, who may or may not have been wearing panties over his face last Sunday, was fined as well.

The NFL has laid down the law when it comes to face coverings, but some coaches are still either refusing to wear a mask in certain situations or simply forgetting to. The league has now sent out an even more stern warning to teams around the league threatening both suspensions and forfeiture of draft picks if masks aren’t worn properly.

NFL sent another strongly-worded memo to team executives, GMs and HCs today, urging all to be in compliance with game-day protocols (wearing masks). “We will address lack of compliance with accountability measures that may include…suspensions and/or forfeiture of draft picks.”

Players, coaches, and other staffers are tested for coronavirus daily other than on gameday. The final test before gameday comes the morning of the day prior.

For some folks, fines and now possible suspensions and forfeiture of draft seem like harsh punishments to hand out to teams when the test results are seemingly up to date for all involved. Also, the 53 players on the sideline don’t have to wear masks throughout the game. The counterpoint to all that, however, is that it’s not like the league is asking coaches to juggle bowling balls while coaching on Sundays, it’s just wearing a mask for a few hours.

With possible suspensions and draft picks on the line now, it’ll be interesting to see how coaches look on the sidelines this weekend.