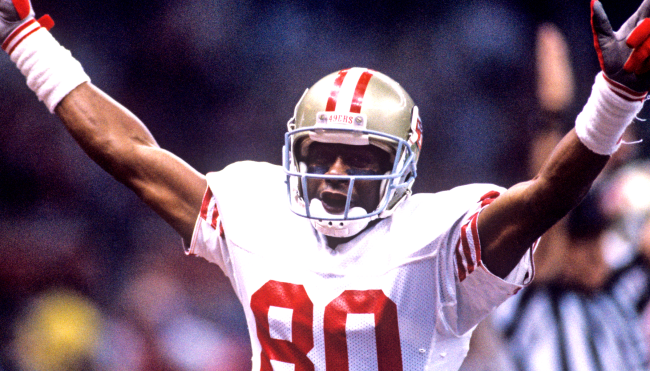 After retiring with over 100 NFL records to his name, including the most receptions (1,549), touchdown receptions (197), and receiving yards (22,895), Jerry Rice was inducted into into pretty much every Hall of Fame where he was eligible.

In 2010, NFL Network even went so far as to call him the greatest player in NFL history.

He was pretty good.

But how good would Jerry Rice be if he played in today’s NFL?

According to self-proclaimed NFL Data Analyst Harrison P. Kent IV, the Founder & CEO of Kent Analytics, Rice probably wouldn’t even be able to get on the field.

“Jerry Rice, who laughably ran a 4.71 40, would be a practice squad player in today’s NFL,” Kent tweeted on Monday. “A prime Rice, my algorithms suggest, would be the 193rd most effective WR today. Rice, enabled by coach & QB talent, was somewhat effective in his day, but today’s WRs are a different breed.”

Is he trolling us? His tweet has received over 1,300 comments from people on the internet, most of which are very upset with him.

This is laughable. Stop. Jerry Rice would absolutely DOMINATE today with all the rules built around protecting QBs and receivers.

Proof that analytics aren't everything. And, are often times, flat wrong.

Does your “algorithms” show any of these 🤣🤣🤣🤫🤫🤫🤫 pic.twitter.com/3OFXrJPUnm

“You see this number here? That’s how many people retweeted it and this number over here— that’s your likes. You can see we got 72 and we got 513. But this number right here in the middle… 750. BOOM! That’s a ratio, Pat.” pic.twitter.com/KT9B6G9pKY

“Jerry Rice, who laughably ran a 4.71 40, would be a practice squad player in today’s NFL” — says some nerd who’s never played a down of organized football pic.twitter.com/5oymigi7Zd

Just because I have never played football, formally or in a “pick-up” style, does not mean that I do not understand the sport on a deeper level than you do. To be blunt, I am very likely far more intelligent than you are. My analytical abilities outweigh your on-field experience.

Spouts off about his superior intelligence and uncanny football analysis abilities and then says that Jerry rice would be a low level receiver in todays league.

I've watched my wife give birth 4 times. Doesn't mean I should be lecturing expectant mothers.

This guy has got to be trolling us, right?

I come from a more genteel family that has always prized academic rather than athletic prowess. In addition, the sports in which I participated in my youth were of a different character than football. I was once a very competitive badminton player and a novice at polo.

It appears that I have once again angered the goofs of Kansas and Missouri. A simple piece of advice: if you are from anywhere in the United States that can be considered “The Midwest”, do not try to argue with me. The median Midwesterner IQ hardly exceeds that of a tree stump. https://t.co/QRZhmnFxFe

Thomas Brady’s success is the result of his premier weaponry. I will reiterate for the easily brainwashed among us: Brady ranks but 24th in effectiveness among all QBs when assessed on a ceteris paribus basis. He ought to retire. The #Buccaneers cannot win a Super Bowl with him.

The #Jaguars have made a grave error in dismissing Urban Meyer. He may not be the most well-mannered HC in the league, but he is an effective play caller. My algorithmic models suggest that he ranks 12th among play callers in 2021. Meyer is a scapegoat for the failure of Baalke.