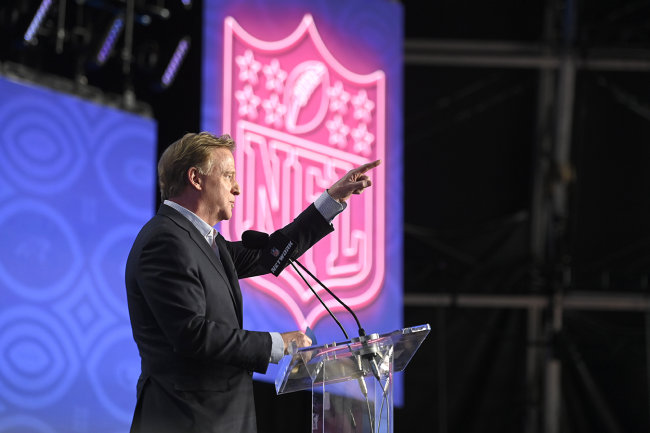 When it comes to the NFL Draft, there are very few traditions like booing the commissioner. As Roger Goodell, who most — if not all – NFL fans can agree to dislike, takes the stage every year, he is met by booming boos. Without fail.

Whether it be as he opens the draft, announces the first pick, or announces the last pick, Goodell gets booed. Here was the scene as the 63-year-old took to the stage for the first time in Las Vegas on Thursday afternoon:

Somewhere far far away is Roger Goodell is getting boo’d 😂😂😂 #NFL #NFLDraft pic.twitter.com/vZDnTAFaI5

In recent years, Goodell has encouraged the boos. It’s like he is embracing the villain role, which totally sucks all of the excitement out of the moment.

Despite the increased embracement of the boos, they do not stop. In fact, they may have been louder than ever on Friday night as he announced a second round pick for the Cowboys. Once again, however, he made it all about himself and that is so lame.

Despite Goodell’s encouragement, the joy of booing him will never dissipate. It’s a tradition that simply will never waver.

This year, the NFL Draft coverage took things up a notch and planted a camera on Goodell. It wasn’t noticeable at the time, but it was there and it captured POV video of Goodell as he announced Aidan Hutchinson as the No. 2 overall pick to the Lions on Thursday.

While the unique perspective is kinda cool, most importantly, the video allows you to experience first-hand what it’s like to be booed by the masses.