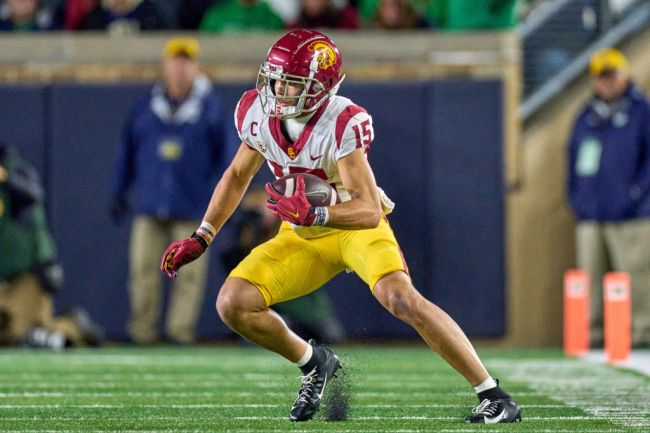 Drake London has been one of the darlings of this year’s draft season. Despite playing for a very bad USC team last season and suffering a season-ending injury in October, he managed to stand out enough to keep himself in the crowded list of this year’s top receivers.

Since the end of the season, he has garnered quite a bit of national attention, with some analysts believing he could be the best receiver to come out of this class and many believing we’ll see him taken in the first 15 picks.

In fact, there might only be one issue holding him back from being the obvious pick for 1st receiver off the board. His data shows that he might have issues separating.

London was great at making contested catches during his time at USC, but he also had a lot of those catches, which has some concerned that a lack of ability to separate might be forcing him into those situations.

In the past, that might not have been an issue given how dominant his numbers were last season and how good he looks on film, but recent history could be causing some to worry more about it than expected.

The Pac-12 has had a couple of high profile receivers in recent seasons who put up big numbers, did well in contested catch situations, got drafted early, and then flopped for the teams that drafted them. The cautionary tales of N’Keal Harry and JJ Arcega Whiteside could be what’s causing some to not be entirely sold on London.

Unfortunately, he didn’t run the 40-yard dash at his Pro Day today to prove those doubters wrong.

USC WR Drake London, coming off of a major ankle injury, has opted against running a 40 at his Pro Day today.

Scouts and coaches in attendance are still getting a look at some route running and footwork from the PAC-12 Offensive Player of the Year.

Obviously, if it was a concern about the health of his ankle, then not running the 40 was the right decision, but the decision has some fans wondering if the decision was made because of what his time would have looked like.

Now London will head into the NFL Draft with one big question mark hanging over him. We’ll just have to wait and see how it impacts his draft stock.