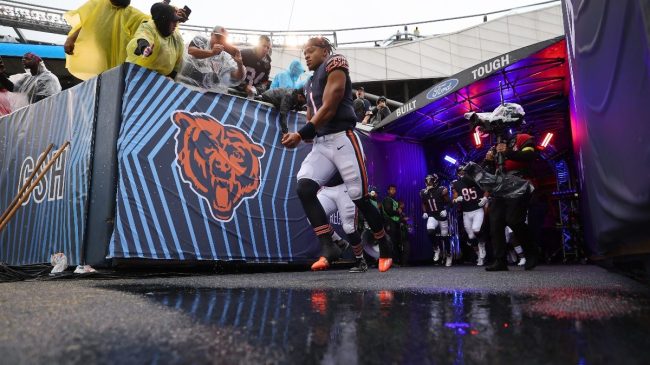 The Chicago Bears-San Francisco 49ers game is an absolute mess right now all thanks to the poor conditions of Soldier Field. Even so, both teams are trudging on in their NFL season opener. However, fans lost their minds a bit after witnessing a bizarre penalty.

According to Field Yates, Chicago was flagged for unsportsmanlike conduct after the holder, Trenton Gill, tried drying off the field with a towel. We didn’t know that was a rule, but it makes sense. That’d be like a pro golfer clearing their ball out of the heavy rough or something.

Bears holder Trenton Gill was just called for an unsportsmanlike conduct penalty for bringing a towel onto the field while trying to dry the kicking area off before a field goal attempt.

Also, who in their right mind thinks a towel is going to suddenly dry up a spot on a field that’s basically a shallow lake at this point? It’s just a horrendous penalty and of course, it was committed by the Bears. Either way, NFL fans let Chicago hear it.

You won’t believe this but the towel method didn’t dry a damn thing and they were penalized for it pic.twitter.com/nJY7YEtOGU

Never heard of it until today.

The Bears just got called for illegal toweling.

Don’t forget to bring a towel!

It’s hard to argue with this guy.

Maybe don’t have a shitty field?

Well, it makes sense to us. Maybe not to some Bears fans though.

At the end of the day, the NFL referees are following a rule that’s likely been in place for quite some time. This may, or not be the first time it’s ever been called. Whether Bears fans like it or not.