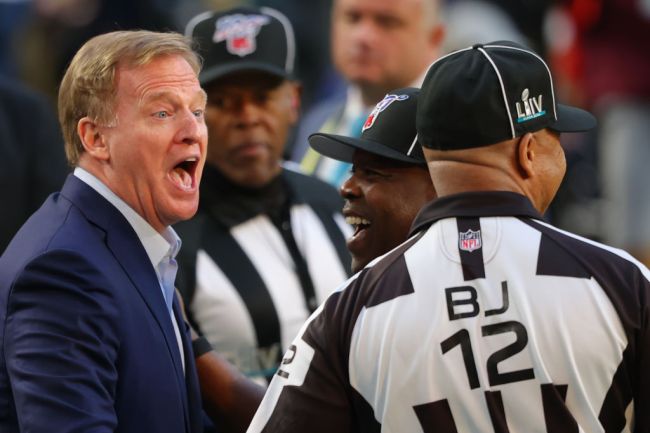 You’d be tough to find a single NFL fan that likes the new taunting rules. It seems like every week an official is throwing a flag after a player simply looks at an opponent the wrong way, and people are extremely fed up with it. NFL commissioner Roger Goodell enjoys the new rules, however, and he even claims that coaches around the league do too.

During his Tuesday press conference at the league’s fall meetings, Goodell doubled down on the new taunting rules explaining that coaches are “strongly in favor” on penalizing taunting.

That statement is about as believable as saying that people enjoy high gas prices. At the end of the day, the calls are subjective yet crucial to the outcome of the game itself. Plus, they’re dumb, just really, really dumb.

Roger Goodell reiterates coaches are strongly in favor of the emphasis on penalizing taunting and in turn so is the league. “We believe this is the right thing to do and we’re committed to it.”

Earlier this season we did find out that Bill Belichick, to no surprise at all, does appreciate the new taunting rules.

“In general, I don’t really think there’s a place for taunting in the game,” Belichick explained on The Greg Hill Show. “I think that’s poor sportsmanship and it leads to other things. It leads to retaliation, and then where do you draw the line? So I think the whole idea of the rule is to kind of nip it in the bud and not let it get started. I’m in favor of that.”

Okay cool, so Bill likes more flags, but it’s tough to believe that coaches around the league are “strongly in favor” of the new rules.

NFL fans weren’t buying Goodell’s previous comments about the new rules and they certainly aren’t now after his most recent comments. Bad news for them, though, because there’s no chance the rules are changing this season.

Tell roger he runs an ENTERTAINMENT BUSINESS stop taking the fun out . Tv ratings drop that rule won’t be there next year https://t.co/enVplI9ckO

What coaches? I call bs that a majority of coaches are pro neutering the emotions out of the game they love. #NFL https://t.co/2L3xpGDHBl

Translation. I have zero clue what the fans, players, or anyone wants nor do I care. Also, I am bad at running a league but since I'm the king you all can piss off. https://t.co/L1kCXUfGDy

Good god this guy sucks so much. https://t.co/ehvPhzOuBV