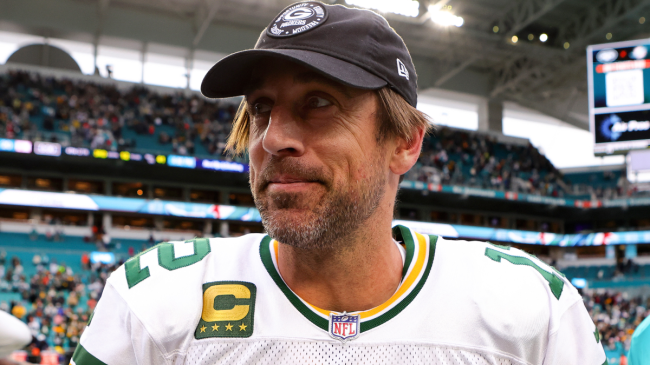 Stop us if you’ve heard this one before: Aaron Rodgers and the Green Bay Packers underperformed in a win-or-go-home scenario.

Facing the Detroit Lions at Lambeau Field with a chance to qualify for the NFC playoffs despite an up-and-down season, the Packers ultimately lost 20-16. In the game, Rodgers completed 17 of 27 passes for 205 yards, one touchdown, and one interception.

Heading into the game, Rodgers was (unsurprisingly) feeling good about the team’s chances, as he went on The Pat McAfee Show to essentially discuss the playoffs.

When talking about the Packers’ roller coaster of a season, Rodgers seemed to imply that qualifying for the playoffs was already a forgone conclusion:

“Okay, now you’re going to change the whole narrative: ‘Okay, now nobody wants to see the Packers in the playoffs.’ So if you follow along with the narrative, you really ride this crazy roller coaster throughout the season,” the 38-year-old quarterback said.

As a result of the Packers’ loss to the Lions, Geno Smith and the Seattle Seahawks qualified for the NFC Playoffs as the 7th and final seed.

Following the loss, NFL fans (and actual teams) took to social media to clown on Rodgers, who might have played in his final NFL game:

I love that this was Aaron Rodgers last pass as a packer lmfao pic.twitter.com/vtsTuzaQ7a

Aaron Rodgers and Packers eliminated from the playoffs

Unfortunately for the Lions, though, despite their 9-8 record, they ultimately missed out on the postseason this year.

The NFL Playoffs will begin on Saturday, January 14 with a matchup between the Seahawks an 49ers at 4:30 and a game between the Chargers and Jaguars at 8:15. Then, on Sunday, there are another three games: Dolphins vs. Bills, Giants vs. Vikings, and Ravens vs. Bengals.

Finally, on Monday, the Wild Card round will conclude with a Monday Night Football game between the Cowboys and Bucs. Thanks to their #1 overall seeds, both the Kansas City Chiefs and Philadelphia Eagles will have a bye-week.