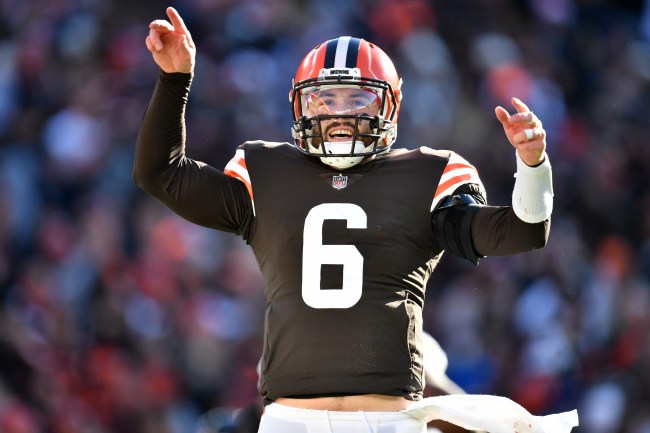 The Cleveland Browns already knew they were going to be a bit shorthanded on Saturday, but the news just got even worse for them. Today, Baker Mayfield joined the list of players likely to miss Saturday’s key matchup against the Las Vegas Raiders.

That list already included a huge chunk of their offensive firepower. Jarvis Landry, Wyatt Teller, and Austin Hooper all had positive tests and Kareem Hunt is unlikely to play with an ankle injury.

With head coach Kevin Stefanski also testing positive, the situation is getting pretty tough for the Browns as they fight for a playoff spot. It has gotten to the point that fans are getting ready to call Shane Falco.

Suiting up for the Cleveland Browns in critical game this weekend pic.twitter.com/RGU2rLcp8b

Maybe it’ll be Paul Crewe and his fellow inmates suiting up for the Browns this weekend.

Maybe it’ll be this little kid.

Live look at who will be playing for the Cleveland Browns this week: pic.twitter.com/joa4VV2W4Q

Regardless, it’s certainly going to be pretty lonely for whoever is left at Browns practice for the rest of this week.

Maybe the Cleveland Browns actually should see if Keanu and his buddies are available to take on the Raiders this weekend.