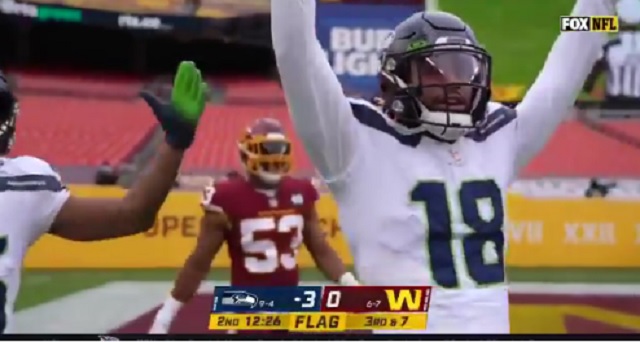 Fox is stepping up their camera game.

During Sunday’s Washington-Seawhwks, Fox sports appeared to debut a new camera lens near the endzone that featured some amazingly clear video.

This camera angle is insane 🤯🤯

Update: this is the camera the FOX crew is using near the endzone during the game.

The awesome on-field shots on FOX’s broadcast of #Seahawks–#WashingtonFootball Team are courtesy of this contraption the crew nicknames “The Megalodon.” Here it is. And here’s Mike Smole, who is operating it today. He calls it a “poor man’s Steadicam.” We should all be so poor. pic.twitter.com/RWuYjeaBCe

Alright, here's the clearest look at that #FOXcamera set up I've seen so far. Ronin gimbal, Sony Camera, Sony lens. Camera is controlled by the buttons and joystick on the handle. Photo: (AP Photo/Andrew Harnik) pic.twitter.com/OmDNKxkCRk

Fans were impressed with the amazing camera quality used by Fox.

This shot looks straight out of Madden. Can we get something like this for next season @NASCARONFOX ? #NASCAR #NASCARonFOX https://t.co/uIedv0jo5k

I thought this was Madden on the PS6 https://t.co/EYZ9yFzfon

Feel like this was recorded from my POV.. 👀 https://t.co/9v1uvhCq1V