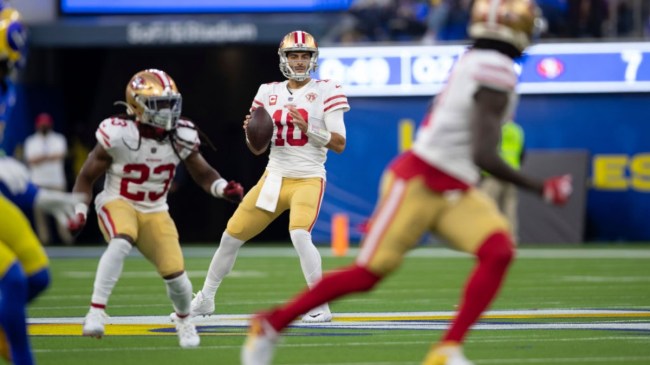 The San Francisco 49ers played their last game of the preseason last night, but they still have one major unsettled situation to deal with on their roster.

Jimmy Garoppolo hasn’t taken a snap for the team this preseason and was listed as the team’s 4th quarterback on their first depth chart, but has still yet to be traded.

The 49ers are running out of time to trade Garoppolo and it doesn’t seem like they’ve gotten any closer to moving him despite their recent efforts.

According to NFL insider Ian Rapoport, that may remain the case heading into the regular season. Rapoport reported today that a trade partner for Garoppolo currently does not exist.

From @NFLNetwork: Players to watch as we get closer to Tuesday, taking a look at #49ers QB Jimmy Garoppolo, #Chiefs RB Ronald Jones, and #Steelers QB Mason Rudolph (who has drawn trade interest). pic.twitter.com/hsyKqC8LRt

At this point in the year, it was hard to see much of a market materializing for Garoppolo unless there was an injury. He carries way too big of a contract to serve as a backup and there are no teams outside of the 49ers’ division that would be interested in him as their starter.

The team’s GM recently seemed to indicate that the time to cut Garoppolo and move on from this situation was approaching and this report makes that seem like an inevitability. If they choose not to go that route, then they’ll likely be stuck with Garoppolo on the roster unless another team’s quarterback situation changes.

The best option for both the 49ers and Garoppolo at this point seems to just be letting go of Jimmy G and letting him find whatever team is the best fit for him.