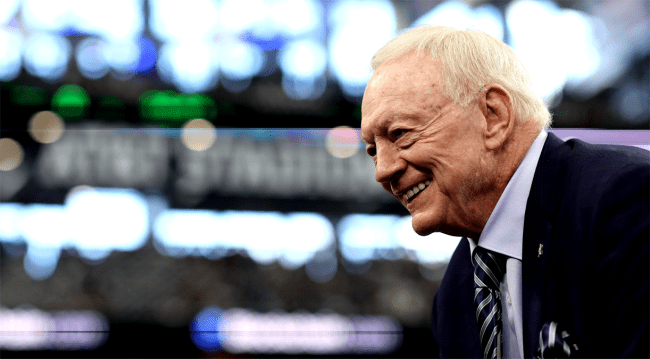 There were a ton of really good Halloween costumes revealed over the past few days: tennis influencer Rachel Stuhlmann as Gabriela Sabatini, Diddy dressed up as the Joker, Olivia Dunne as a dark angel, and more really went all out this year.

Someone else who decided to push the envelope this year with his Halloween costume was Jerry Jones.

What did the Dallas Cowboys owner dress up as? How about a blind NFL referee?

Dude really is bulletproof, and he knows it.

“Do you know that I was dressed up as a blind official? I had a lot of fun,” Jerry Jones said, reports Yahoo! Sports’ Jori Epstein. “I’m being very careful here because I’m getting real close to a fine. It shows how much I love them to dress up as them… how much I respect their decision-making.”

According to the NFL’s rules as shared by NBC DFW on Tuesday, “Comments regarding the quality of officiating, individual calls or missed calls, the League’s officiating department, an officiating crew, or an individual game official; [a]ccusing game officials of acting with bias or in any way questioning the integrity of NFL game officials; or [p]osting negative or derogatory/demeaning content pertaining to officiating on social media.”

“Oh yeah, I had the cane and everything,” Jones told Sports Illustrated on Sunday. “And I used it on some people, too.”

Many NFL fans, after seeing Jerry Jones’ blind referee Halloween costume and reading or hearing his quotes, realllly want to see him get fined.

hahaha, he's gonna get a fine AND bad call in a big game

More importantly, at least to many Cowboys fans, is Jerry Jones’ Halloween costume going to cost the team when it comes to getting calls from the refs?

“Gonna be zero holding calls the rest of this season for that one. Between that and his Zeke comment today, guy needs to stop sabotaging the team,” one Dallas fan tweeted.

As an eagles fan, this is a great costume idea😆

See? Not everyone hated it. Others didn’t even notice as they had other things on their mind.

Go get a wideout jackass. We definitely can’t improve on offense.