NFL Sends Memo To Coaches, Warns Of Disciplinary Action If Masks Aren’t Worn At All Times 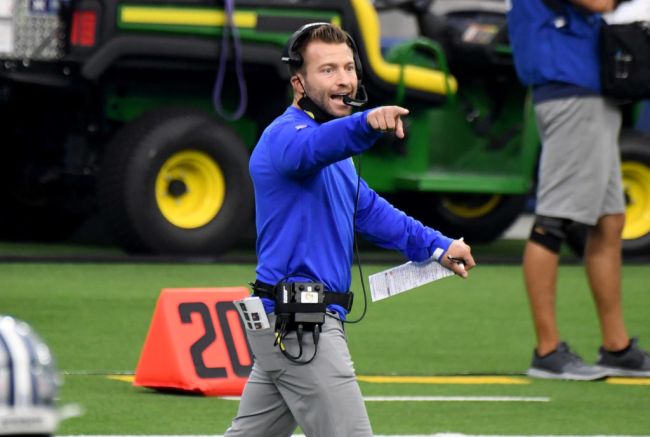 Week 1 in the NFL is almost in the books and what an opening week it has been. Just weeks ago we didn’t really know if football was going to be played, and we certainly didn’t know what it was going to look like, but so far so good.

While the league has seemingly gotten underway without a hitch, the NFL sent a memo to teams about coaches and various personnel wearing masks during games. During Sunday night’s game between the Rams and Cowboys, Dallas’ Mike McCarthy was seen wearing his mask the entire game while Los Angeles’ Sean McVay had his pulled down underneath his chin more often than not.

The memo, written by executive vice president of football operations Troy Vincent, emphasized the importance of wearing masks and a failure to do so could result in disciplinary action while also jeopardizing the rest of the season.

“The NFL-NFLPA gameday protocol, which reflects the advice of infectious disease experts, club medical staffs and local and state governmental regulations, requires all individuals with bench area access [including coaches and members of the club medical staff] to wear face coverings at all times, Vincent wrote according to ESPN.

“Failure to adhere to this requirement will result in accountability measures being imposed against offending individuals and/or clubs. The face covering must be worn as designed so that it securely fits across the wearer’s nose and mouth to prevent the transmission of the virus.”

Just before the season began, the NFL’s protocols were adjusted stating that anyone with bench area access, other than players, must wear a mask at all times. Coaches and personnel are also able to wear face shields as well, which is the route Andy Reid took on Thursday night.

The obvious question here is that players don’t have to wear masks and are on the field laying on top of each other, but coaches have to or else they could be fined? Strange times, especially given the fact anyone on the field would have already tested negative for the virus shortly before kickoff.