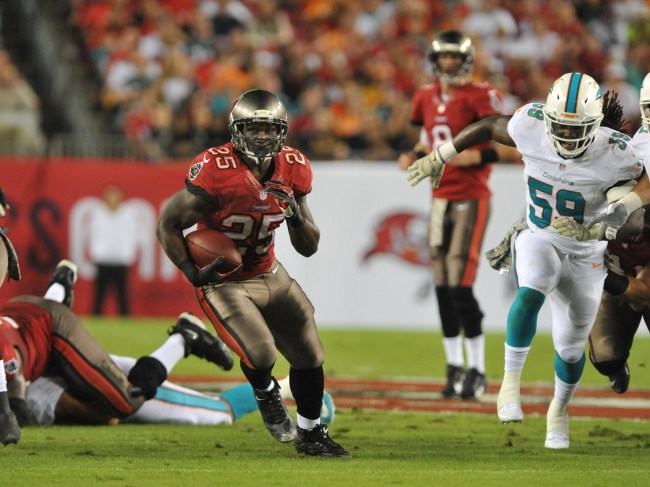 Although the National Football League (NFL) is likely under no illusion that the opioid painkillers their doctors are doling out are safe, the organization would rather players keep sucking down these drugs instead of giving them the option to use medical marijuana.

The NFL recently denied free agent running back Mike James the freedom to use cannabis to combat the chronic pain stemming from an ankle injury he sustained back in 2013. The overall message is that the league does not care about the well-being of its players, only that nothing, not even the lifeblood of the game, upset the money machine.

Just last month, James, who played for the Detroit Lions in 2017, applied for a therapeutic use exemption (TUE) so he could use cannabis to manage his pain. The 27-year-old has come to admire the powers of pot, as he believes the herb is a safer alternative to painkillers. James says having the ability to care for his condition through his medication of choice is the only thing stopping him from signing with another team.

“I am hopeful that I’ll be able to keep playing football,” James told NJ.com. “It is a game that I love very dearly. I know right now I’m doing something that makes some people uncomfortable, and that I’m going against the establishment to push for a change in the way they look at this medicine. I know there’s a greater purpose here for a lot of guys in this league who I consider family members.”

It is important to point out that James was not always an advocate for marijuana. Following his ankle industry five years ago, he was popping as many painkillers as the NFL’s doctors were willing to prescribe. It was only after the dreaded junkie money got hold of him that his wife, Aubrey, encouraged him to give marijuana a try. Although he “didn’t want to believe the benefits,” mostly because he associated the herb with being “unsuccessful,” James says marijuana provided him with “instant relief.”

Although he had found a way to battle his pain without turning his career in to the Football Diaries, the only problem was marijuana, regardless of whether it is strictly for medicinal use, is a violation of the NFL’s drug policy. It was at this point that James could have attempted to self-medicate under the radar of the league’s dope-sniffing hounds. But he decided to approach the situation with honesty, requesting a TUE in hopes of receiving a pass from league for his medical cannabis use.

But being forthright with his intentions didn’t pay off.

The NFL, perhaps feeling the weight of the cannabis issue in recent years, rejected James’ application. Citing “privacy concerns,” the league has, so far, refused to provide any details surrounding its decision. It is conceivable, however, that officials denied the request to avoid being inundated with TUE applications from a slew of players. Others, including Tennessee Titan linebacker Derrick Morgan, have stepped up in recent years asking the league to give players the option of using medical marijuana as an alterative to opioids.

As it stands, opioids are one of the biggest scourges on the nation. The latest data shows that more than 64,000 people died in 2016 as a result of these drugs – that’s more death than the whole of the Vietnam war. It is a situation that continues to spiral more out of control with each passing day.

Still, some argue that the conditions are not hopeless for players wanting to use medical marijuana instead of opioids – they just have to know how to cheat the system. Since the NFL only tests players for banned substances during offseason activities and training camp, “if they stop smoking in approximately the middle of March and refrain until their once-per-year test (the window opens on 4/20 and lasts until early August), they can smoke with impunity throughout most of training camp, most of the preseason, and all of the regular season and postseason,” writes Mike Florio for NBC Sports.

“That’s why the NFL Players Association has no reason to make any concessions to the league to change or scrap the marijuana policy,” Florio added. “Smart, reasonably disciplined players know how to work the system. Those who end up facing suspensions are either not smart or have a real problem that requires the kind of intervention and rehab that the league’s substance-abuse program provides.”

Some athletes, including those involved in college and professional sports, say it is easy to pass drug tests.

Right now, the NFL is biding its time with respect to allowing players to use marijuana. Although the league has invested millions in researching player wellness, not a single cent involves marijuana. Much like any other major corporation in the United States, the NFL simply isn’t willing to go against the federal government just to let players smoke weed. There is simply too much at stake to lay it all on the line for a substance Uncle Sam considers one of the most dangerous drugs in the world. But the minute this snag ceases to exist, we could see more professional sports organizations caring less about marijuana use. Some experts say the U.S. could see federal legalization in 2021.