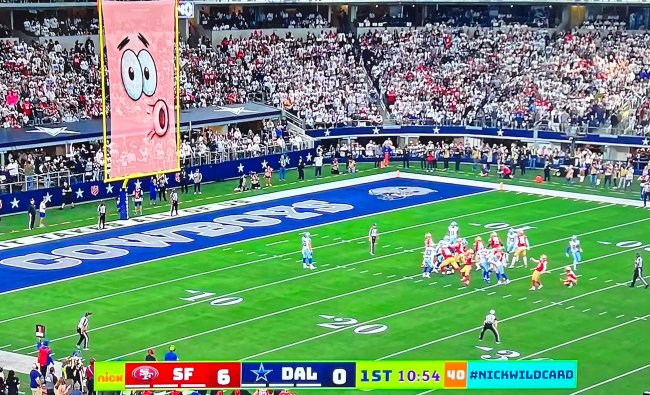 Following the debut of the Nickelodeon NFL broadcast during last year’s Wild Card game between the Chicago Bears and the New Orleans Saints in 2021, the beloved simulcast returned in 2022 for the Wild card matchup between the Dallas Cowboys and the San Francisco 49ers.

The second-ever major live sporting event to be broadcast on the channel, the stream features CGI effects such as slim cannons, a Patrick Star field goal net, and some sort of ancient slime monster that rises up from the ground out of the depths of slime hell.

The field is already slimed! 🔥🔥🔥

Just give Nickelodeon the Emmy pic.twitter.com/VG3yPAt2wu

The slime to trace receiver routes is a nice touch pic.twitter.com/G08iVfFlNp

This year’s game on Nickelodeon is being called by play-by-play broadcaster Noah Eagle and CBS Sports analyst Nate Burleson, who are joined by Nick stars Gabrielle Nevaeh Green in the booth and Young Dylan Schefter as the sideline reporter.

In addition to the on-screen graphics mentioned above, the NFL broadcast on Nickelodeon has also featured characters such as Young Sheldon, who appeared over the scoring bug to explain rules such as false starts to the viewers, and SpongeBob SquarePants, who popped up in graphics that shared participating athletes’ “Favorite snack” and “Favorite classic Nick show”.

Speaking to CBS Sports, Eagle, who’s calling the game, said this year’s edition of the broadcast will be “truly special”:

“We’re all just really excited to be back together as a complete total group – everyone behind the scenes, everybody on camera, et cetera. And I think we’re especially excited with the matchup that we got, going to Jerry’s World in Dallas as well. It’s going to be truly special. So, excited is probably the best word, although it doesn’t really do justice, the feeling we’ve all got,” Eagle said.

All jokes aside, the Nickelodeon stream hopefully provides a happy middle ground for parents who want to watch playoff football and entertain their children at the same time.