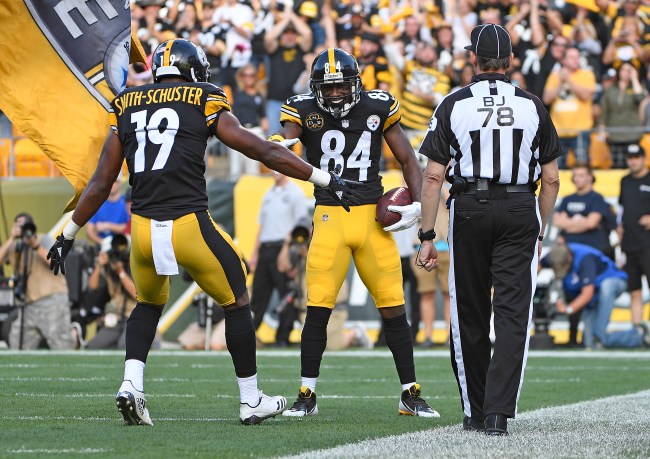 Antonio Brown reached peak pettiness this past Sunday when he went out of his way to rip former teammate JuJu Smith-Schuster after the 22-year-old was named team MVP. The new Raiders receiver delivered a low blow to Smith-Schuster by rehashing his devastating fumble near the end of Pittsburgh’s Week 16 loss to the New Orleans Saints, despite the fact that JuJu caught 11 passes for 115 yards in that game.

JuJu appeared to be blindsided by the call out and revealed on Twitter that all he ever did was “show that man love and respect from the moment I got to the league.”

Brown’s cheap shot has been consistent with his behavior this offseason, as we’re just weeks away from Brown ripping quarterback Ben Roethlisberger for having an “owner’s mentality.”

AB’s behavior crossed the line and former teammates and other players across the league didn’t hesitate to check him on it.

I don’t address my personal relationships via social media like attention whores and clowns. If I got ya number I call, if I got ya addy I pull up.

Mike Mitchell, who played free safety for the Steelers from 2014-2017, chose to shine a light on a former teammate who is currently exemplifying positivity.

everyone so focused on negativity and drama y’all just not gone pay attention to the fact @RyanShazier out here box jumping and ish breaking all barriers being all types of role models pic.twitter.com/YsR5Xm825u

I respect his game but I can’t wait to smash this dude 😂 No need for that https://t.co/luWgSZqCOB

No need for that. Showing true colors right here. No respect for this dude

Ryan Clark, former Steelers safety who in January of this year criticized Brown by claiming that the Steelers must get rid of Brown to preserve team chemistry. Clark also outed Brown for things like going on Facebook Live while a coach was talking, leaking team information and complaining about how many touches he got. Brown responded by calling Clark an “Uncle Tom” on Instagram.

Clark feels validated in the wake of AB further exposing himself as a giant assface.

Yet everyone was mad at me!! 🤷🏾‍♂️ Now they are starting to see it.

Emmanuel Sanders just wants to sit in a circle and sing kum-bah-yah.

🗣 Alexa, play “Why can’t we be friends?” by War pic.twitter.com/7J7LmnwHQ1

It’s a damn shame the Steelers don’t play the Raiders in 2019.