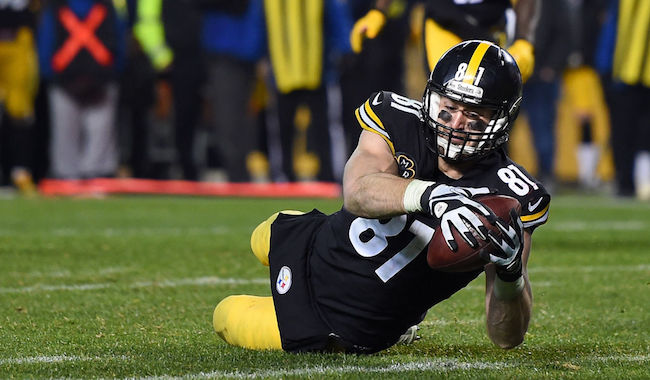 The NFL’s infamous catch rule has been at the center of constant controversy and confusing fans, players, coaches, and even referees for the past couple of decades. Despite the efforts of the league to clarify what constitutes a catch, the constantly evolving definition of possession still rears its ugly head far too often. The Pittsburgh Steelers became a notable victim of the rule after a g0-ahead touchdown by Jesse James was overturned in the final 30 seconds of their game against the Patriots in Week 15, and it was undoubtedly a factor in Roger Goodell finally admitting it sucks.

Goodell said the NFL would be taking a closer look at the issue in the off-season, and they’ve come up with a few new solutions in the hope of solving the problem. After consulting with a number of people around the world of football, Senior VP of Officiating Al Riveron posted a list of proposed changes that will be discussed when the league’s owners meet later this month (according to USA Today, it will need the endorsement of at least 24 of them to be instituted).

After much deliberation & input from coaches, players, @NFLLegends, & club executives, the @NFL Competition Committee will recommend the following language simplifying the catch rule at the Annual Meeting next week. pic.twitter.com/hJwH5YYBRK

Riveron also posted a video of previously negated catches that would count as a reception under the new rules. It includes James’ overturned touchdown, which makes sense considering breaking the plane is considered a score in every other instance.

.@NFL Competition Committee proposal noted in the previous tweet simplifies the catch process & allows for plays such as the @DezBryant (2014 post-season) and @JJames18_ (2017 season) to become catches. pic.twitter.com/K2caIndpGZ

Previous iterations of the rule required players to make a “football move,” but there’s never been an official explanation as to what qualifies as one until now. I doubt this will be the end of the catch discussion, but at least it’s a (third) step in the right direction.