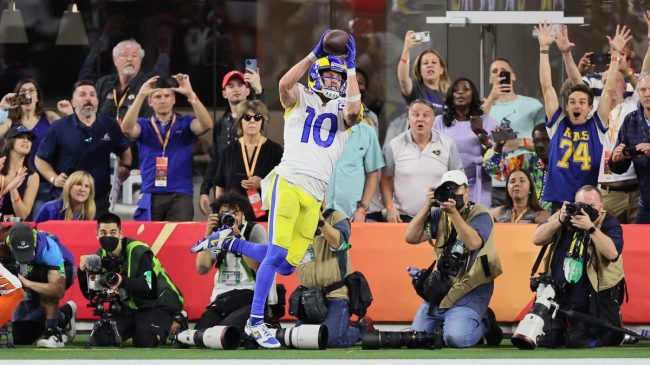 The star wide receiver landed a huge contract extension from the Rams after an offseason of negotiations. Kupp was asked about those contract talks earlier in the week, to which he responded the team was still working through things.

“And so I want this to be something that makes sense for everyone. I want them to feel good about it, and I think the best way to do that is for me to at least be involved in some capacity. It’s never going to be at the cost of anything on the football field, (but) the more communication, the better, and just be able to find a place we can all feel good.”

The deal is worth $110 million over the next five seasons, according to Adam Schefter, making Kupp one of the highest paid pass catchers in the league.

This has been the year of the receiver, with a ton of high profile wideouts landing massive deals. Kupp is as talented as any, noted by his NFL-leading 145 catches in 2021. He also led the league in yards and touchdowns while helping the Rams take home a Super Bowl crown.

Now, he can set his sights on going back-to-back with the contract talks behind him. News of the deal is taking social media by storm.

Cooper Kupp in the last year:

Add him to the $20 million per year club, because Cooper Kupp just got absolutely 𝐏𝐀𝐈𝐃 💰 pic.twitter.com/HnY7xlAyWp

Cooper Kupp is getting paid 🤑

(via @RapSheet and @TomPelissero) pic.twitter.com/QFu6pguf4j

While many are excited for the pass catcher, they’re also wondering how the Rams are affording all of these offseason deals. They recently extended Aaron Donald’s contract, too, to make him the highest paid non-QB in league history.

Whatever they’re doing is working. They’ll look to find their way back to the Super Bowl next season.