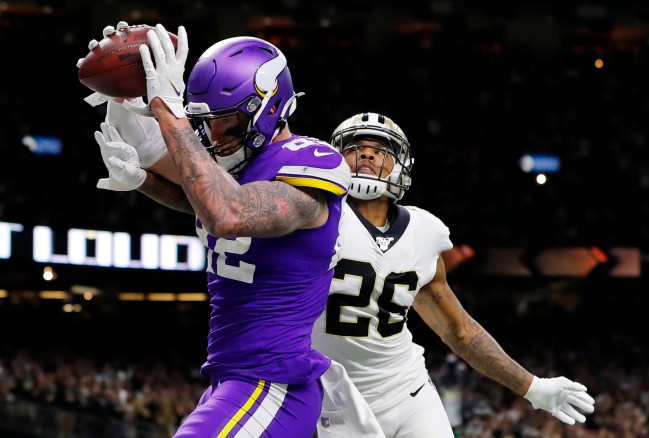 NFL referees haven’t had the greatest of seasons this year; but what’s really new? Over the past decade or so, the zebras have seemed to blow more calls in big games than ever before, making some conspiracy theorists believe that the officials may have a little more skin in the game. While we hope that’s not the case, it does make you wonder, right? I mean, there have been a ton of bad or missed calls in the NFL, and fans are pretty sick of it.

The latest (possible) missed called by NFL referees came the other day during a Wild Card matchup between the New Orleans Saints and Minnesota Vikings. For those who missed the contest, the game went to overtime, with the Vikings winning it on a Kyle Rudolph touchdown catch on third-down. Problem is, the tight end sure looked like he may have created separation from the defender by extending his arm — so take a look for yourself at the play below.

Is that offensive pass interference? Well, it sure kind of looks like it by the letter of the law. Rudolph clearly uses his bigger frame to bully the Saints defender, appearing as if he’s boxing out for a rebound on the basketball court — which, you know, isn’t exactly legal in the NFL. But did NFL referees throw the flag? Nope, they sure didn’t. Should they have? Well… two former NFL officials, Terry McAulay and John Parry, think so, and they tweeted about their thoughts after the no-call.

It is illegal for an offensive player to extend his arm or arms and create clear separation from the defender. That was OPI. #MINvsNO

The last play of @Vikings at @Saints is OPI. By written rule and on-field philosophy, Receiver clearly created an advantage. If called and reviewed, it stands. The consistent standard for creating an overturn remains a topic.

Now I understand if NFL referees didn’t want to throw the flag initially — it’s a bang-bang play and it’s difficult to have a great view of all the contact going on while the ball’s in the air. But to avoid even looking at it on replay is absurd. Literally, isn’t this why there’s pass interference replay, so that plays just like this aren’t missed? That’s what many fans thought.

They didn't even review it????

Sean Payton is going to have some words.

Refs didn’t even review the OPI. They just called game. Two years in a row the Saints have been robbed by missed pass interference calls. pic.twitter.com/1oZxtBReHl

Saints: Why don’t you replay that for pass interference? It’s why the rule was made

It’s the second season in a row that the Saints have gotten royally screwed by NFL referees, and, whether or not that’s pass interference by Kyle Rudolph, fans may have been able to live with the call had officials at least taken a closer look — but, of course, the NFL wanted to save face by avoiding that mess, so they just declared it was a good catch from the jump without even utilizing the replay capability. Now the Vikings travel to Green Bay, while the Saints have an offseason of “what ifs…?” to think about.