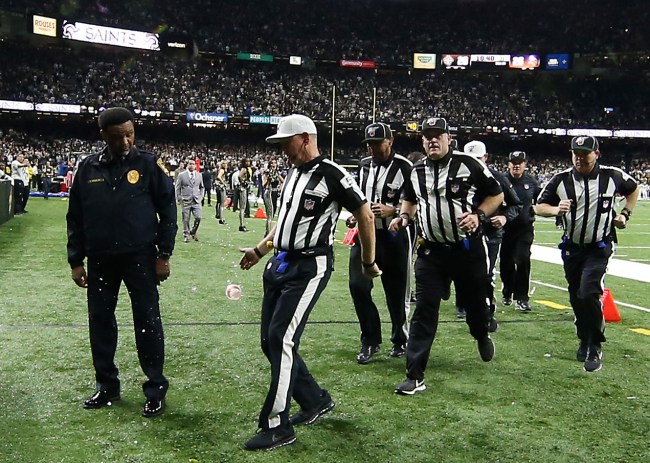 The New Orleans were once again involved in a controversial play that cost their team in the playoffs.

The touchdown from Cousins, game winner.pic.twitter.com/UCsNDvMDzg

Many including former veteran referee Terry McAulay believed that Rudolph committed offensive pass interference by extending his and pushing off.

It is illegal for an offensive player to extend his arm or arms and create clear separation from the defender. That was OPI. #MINvsNO

Looks like a push-off to me, but was it enough?pic.twitter.com/CZdiiMqsk5

Saints fans weren’t happy with the refs on the field and showed their displeasure by throwing debris at them as they went into the locker room.

Saints fans not liking the NFL refs? Why I never… pic.twitter.com/beeBeLFBLL

The NFL’s VP of officiating Al Riveron went on to release a statement saying there wasn’t offensive pass interference on the play because there was contact by both players but none of the contact was enough for refs to call a penalty.

"All angles of the final play of #MINvsNO were looked at in New York – there is contact by both players, but none of that contact rises to the level of a foul." – AL pic.twitter.com/FvnuA3I4cs