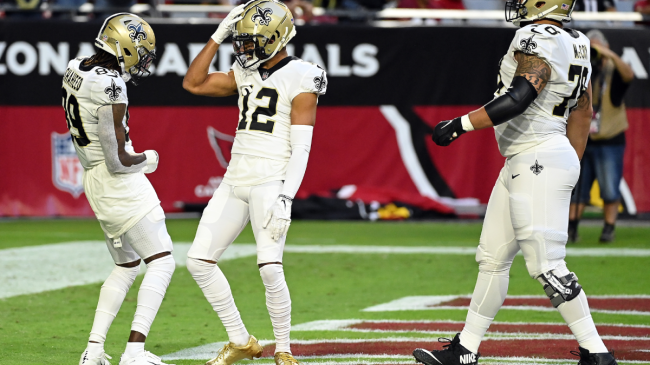 The Saints and Cardinals are battling in Thursday Night Football with each looking to land their third win of the year. The game, to this point, has been surprisingly entertaining with Arizona jumping out to a 28-14 first half lead.

That excitement has been much appreciated by NFL fans, who’ve seen some bad football being played on Thursdays this season.

Adding to that excitement was a huge first touchdown by an unlikely scorer.

Rashid Shaheed nabs long TD on his first touch of the game.

New Orleans struck first with an absolute bomb on their opening drive. QB Andy Dalton threw a dime to rookie wide receiver Rashid Shaheed, who took it across the goal line for a 53-yard score. It was just Shaheed’s second offensive touch of the year, and also his second TD.

The wideout scored on a 44-yard run last week in a loss to the Bengals.

While Shaheed’s 100% scoring rate is impressive, it’s not what had bettors jumping for joy. Instead, it was the timing of that reception that mattered most.

The 53-yard touchdown reception helped bettors cash in in a big way.

Shaheed entered as a long shot to be the first player to reach the endzone. He came in boasting anywhere from +5000 to +8000 odds. With that being said, there were a few gamblers that cashed in when he crossed the goal line.

Some smaller bets paid out sizeable profits, like this bettor who wagered $25 for a $1,250 win.

WE HAVE TNF TOUCHDOWNS 🗣

This person made larger bet, and it cashed in for more than $13K. Not a bad result just two minutes into the TNF action.

Rashid Shaheed might be the most popular player on the field following that touchdown catch. We’ll see if he can help New Orleans complete a second half comeback.