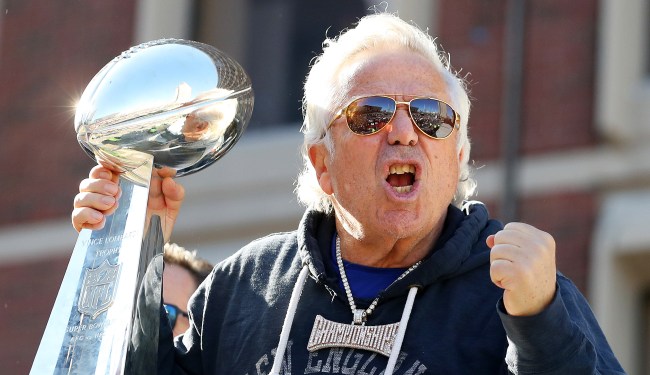 Is it wrong that I am still taking pleasure in the fact that New England Patriots’ owner Robert Kraft will be turning himself in to Jupiter, Fla. police sometime this week on charges of solicitation of prostitution?

I mean, the situation surrounding his arrest is heinous and everyone involved needs to be punished severely, of course, but I am still getting a teensy little bit of enjoyment seeing Kraft’s name being dragged through the mud.

The 77-year-old Kraft is worth somewhere around $6 billion, has a beautiful girlfriend 39-years his junior, and he was hitting up hookers?

Monday morning, former federal prosecutor Mimi Rocah reminded everyone on MSNBC that this scandal is “not about prostitution,” it’s about “human trafficking.”

“It’s not about women having sex with men, it’s about men really raping women essentially,” said Rocah. “They think because they’re paying for it, you know, its somehow voluntary.”

Kraft has denied the charges against him, despite the overwhleming (and graphic) video evidence.

On Friday, the NFL issued a basic statement about the Kraft matter, saying it “is aware of the ongoing law enforcement matter and will continue to monitor developments.”

On Monday, the NFL released another statement on the scandal, saying, “Our Personal Conduct Policy applies equally to everyone in the NFL. We will handle this allegation in the same way we would handle any issue under the Policy. We are seeking a full understanding of the facts, while ensuring that we do not interfere with an ongoing law enforcement enforcement investigation. We will take appropriate action as warranted based on the facts.”

A new NFL statement on #Patriots owner Robert Kraft’s allegations of soliciting prostitution says the league is seeking “a full understanding of the facts” while not interfering with an ongoing investigation. Here it is in full: pic.twitter.com/8x1XMgen6T

As one may recall, the NFL does not always wait until the legal process has fully played itself out before issuing suspensions and fines. Right, Ezekiel Elliott?

According to the NFL’s personal conduct policy, “It is a privilege to be part of the National Football League. Everyone who is part of the league must refrain from ‘conduct detrimental to the integrity of and public confidence in’ the NFL. This includes owners, coaches, players, other team employees, game officials, and employees of the league office, NFL Films, NFL Network, or any other NFL business.”

As Forbes points out, Colts owner Jim Irsay was suspended six months and fined $500,000 in 2014 after pleadeding guilty to driving while intoxicated. While Panthers owner Jerry Richardson was fined $2.75 million and essentially forced to sell the team over allegations of sexual and racial misconduct.

It will be very interesting to see what kind of punishment the NFL deems appropriate for Robert Kraft in this situation.