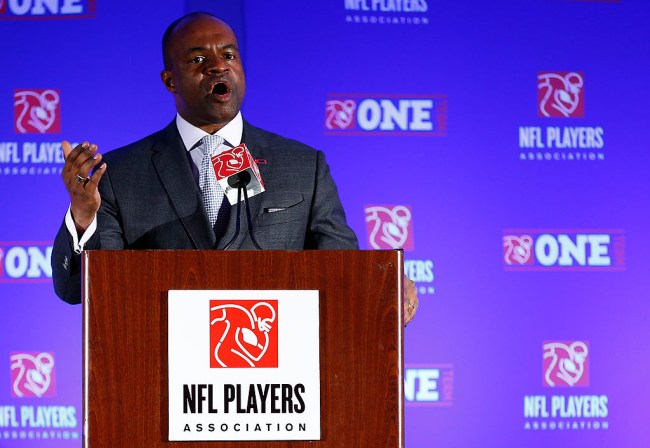 Most professionals sports leagues would like the general public to think their main purpose is to provide entertainment to the masses, but at the end of the day, their primary mission is to generate ungodly sums of cash at every possible turn because that’s just how capitalism works.

Given the amount of money at stake, it’s only natural that everyone involved wants to get their hands on the largest piece of the pie that they can, and while most of these negotiations are done behind closed doors, they occasionally play out in a very public way.

Hockey fans have been forced to suffer through a couple of NHL lockouts over the past two decades, but in 2012, the NFL was also impacted by a labor dispute during a season that was marred by some absolutely atrocious officiating after the league refused to budge while negotiating a new collective bargaining agreement with its referees.

NFL players themselves haven’t gone on strike since their protests resulted in a shortened season in 1987 but there have been some recent rumblings of a potential work stoppage as the players association gears up for a new CBA when the current one expires next March.

Last year, Richard Sherman—who serves on the NFLPA’s executive committee—issued a warning to players and said they should make sure they’re managing their money in a responsible manner a few months after the organization released a work stoppage guide.

There are a number of issues that are currently being contested by both sides, as players are hoping the NFL will think about removing marijuana from its list of banned substances while owners are trying to extend the regular season by another game or two.

There’s still time for all parties to establish a set of agreeable terms, and this week, players from around the league flocked to Miami to meet with the union as they try to sort out the various issues that will come into play as talks continue.

NFLPA executive director DeMaurice Smith will be a major player during these talks, and on Tuesday, he spoke at a rally to outline the sacrifices that may need to be made if the league refuses to cave to demands players value highly—including a strike that could last a couple of years:

“People need to understand that it’s really easy to call for a work stoppage; it’s really hard to win one.

So that’s why I started notifying players four years ago about saving their checks, making changes to their debt structure, and the reality is that if we want to hold out and get everything we want, that’s probably going to mean a two-year strike.”

At this point, it’s probably a tad too early to hit the panic button but I can only hope the XFL manages to make it more than one season without folding this time around in case we need another way to get our pro football fix in the coming years.