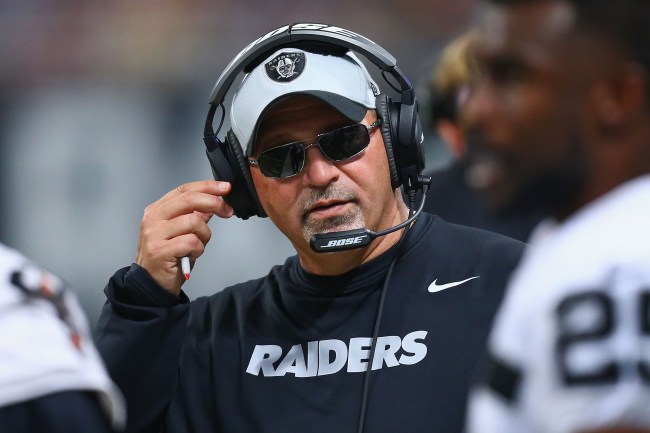 The NFL world has been hit with sad news upon finding out of the passing of Vikings offensive line coach Tony Sparano at just 56 years old. Sparano spent two decades in NFL coaching capacity–amassing a 32-41 record as head coach for the Dolphins and Raiders.

Sparano was discovered unconscious at his home on Sunday morning, according to ESPN’s Adam Schefter:

Sparano complained about chest pains this weekend and went to hospital Thursday. Doctors did tests, but released him Friday.

Sparano and his wife, Jeannette, were about to leave for church this morning when she found him unconscious in their kitchen. She tried CPR, but he could not be revived. He was 56.

Sparano is survived by his wife, Jeanette, his two sons and four grandchildren.

Players, analysts, and organizations took to Twitter to pay their respects to a coach who was universally liked by everyone within the sport.

Sporano Family I am so sorry for your loss. Coach believed in me, trusted me, and stuck with me as a rookie. He would check on my family every HC and QB meeting we would have! He was a great man! I love you coach!

We lost a great man today in our football family. I was only around coach Tony Sparano for a year. But left a lasting impact on my life. Football meant a lot to him but family was everything. My prayers go out to his family. 😢

The Raiders family was deeply saddened to learn of Tony Sparano's passing this morning.

RIP Tony Sparano. I’ve covered the game for 34 years, and he’s as genuine a person as I’ve ever met in the NFL.
Condolences to his family.

Really tough to see this, so much respect for this guy, great coach and great person! You will be missed by so many, thoughts and prayers to your family! RIP Coach https://t.co/cTFqtglDcD

I’m still In shock about the passing of Tony Sparano! He was a players coach everybody loved him, he gave me a chance to come to Miami and show that I could be an every down running back when not many people believed in me! He will be missed but not forgotten! Love you coach RIP

A touching story passed along to me by longtime Dolphins fan @NessMugrabi about former Dolphins head coach Tony Sparano, who passed away today. pic.twitter.com/12qq3Lj4cf