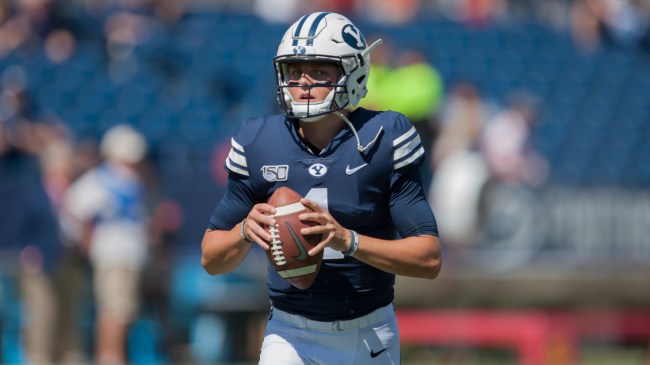 BYU QB Zach Wilson is going to be some team’s franchise QB despite the fact that he looks like he’s about 12-years-old.

Ahead of the draft, several scouts had Wilson as the second-best QB in his draft class behind Trevor Lawrence. ESPN’s Steve Young had some high praise for Wilson.

On Wilson’s arm talent: “The way he throws is somewhat like Aaron Rodgers. … And then his off-platform stuff we talk about a lot, it’s really in many ways reminds me of Patrick Mahomes. I don’t say these names because he’s going to … you still have to go do it. As far as what he’s shown, those are the physical traits.”

On his ceiling: “Every generation has a handful of guys that define the position. He’s set up to be one of those. Now, can he go get it? Can he go do it? There are a lot of filters and a lot of hurdles and a lot of things you have to go through to get there, but I think he’s the No. 2 pick for the Jets because of what that looks like, because of his potential.”

On draft night, Wilson posted several images on social media and he looks extremely young to be in the NFL which led to plenty of jokes from fans.

Can’t believe the day has finally come! Thank you for following me up to the big moment at the #NFLDraft! Really excited for where I land tonight! @verizon #VerizonPartner pic.twitter.com/VrjHmvBbJO

Prom is gonna be sweet https://t.co/l4UgLe53va

I'm no draft expert but I feel like Zach Wilson's stock should be plummeting with all these stupid pics he's posted today pic.twitter.com/766sdsGYK8

Looks like he’d be a huge dick in a 90s Disney movie https://t.co/raRCxNESmW

Guys, I’m legit concerned that he didn’t get a signed permission slip by a parent or guardian to attend. https://t.co/v2RCnpWOkA

Man looks like he’s getting ready for his bar mitzvah. Excited for you to become a man in New York, Zach! ✈️ 🆙 https://t.co/03P7oWeyE1

Just your typical young man ready for his first day on the job as matradee at the local Outback Steakhouse. … https://t.co/EtTdfldjZu

this guy just came in my room and asked if he could Venmo me for a line https://t.co/AVc8ewlBRC