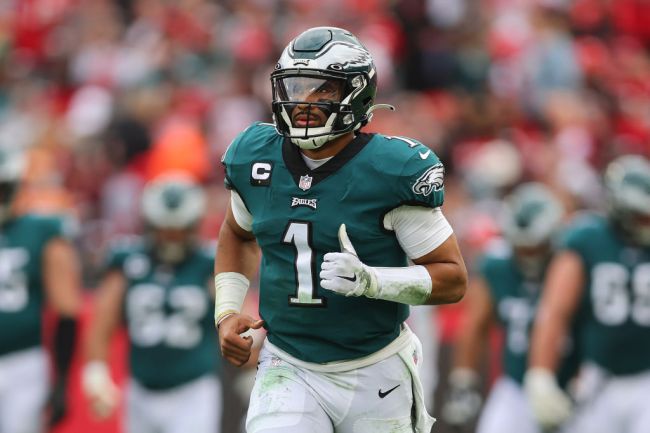 The Philadelphia Eagles seemed to commit to Jalen Hurts as their quarterback of the future when they dealt Carson Wentz to the Indianapolis Colts.

That commitment came into question this offseason when they were reportedly trying to land a trade for a bigger name. Now, it seems they’re ready to reverse course on Hurts if he doesn’t impress next season.

According to ESPN’s Jeremy Fowler, the Eagles are treating this season as a “one year audition” for Hurts.

Eagles believe Hurts has the necessary weapons to prove himself as long-term starter.

It's looking like a "one year audition" with a better QB class coming.

“They’re saying that Jalen Hurts is well positioned to make himself a long-term starter because the Eagles have surrounded him with a good team. Now he’s got A.J. Brown opposite DeVonta Smith. He’s pretty much got everything he needs, and he’s embracing that pressure. This is clearly a one-year audition. The 2023 draft class is very strong at quarterback, so the Eagles have 17 games, or more, to figure out if Hurts is the guy…”

This shouldn’t necessarily come as a surprise to Eagles fans. The team was able to make the playoffs last season, but Hurts didn’t really stand out during the season. When they ran into the Buccaneers in the playoffs, Hurts looked lost for much of the game.

Now he’ll get one more season to prove he can be the guy to take the Eagles to the next level. He’ll have his best group of weapons yet as he tries to prove he/s the right man to remain the starting quarterback for the Eagles. Hurts will get to throw to a 2nd year Devonta Smith and now he has AJ Brown to provide another talented threat.

If Hurts doesn’t convince the Eagles that he’s the guy, they’ll be in good position to draft his replacement next year. On top of owning their own 2023 1st round pick, they also acquired an additional one from the New Orleans Saints. If neither of those falls in range for a QB, they could probably use them in a trade package to get the pick they need.

It looks like there will be plenty of pressure on Jalen Hurts as he takes on what should be an improved NFC East.