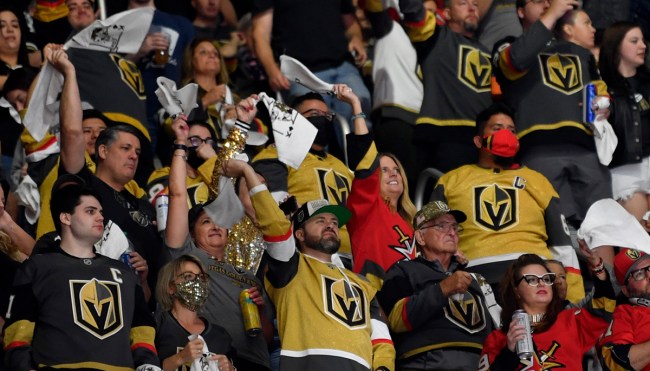 Sports leagues did what they could to make up for the noticeable absence of fans we were suddenly treated to almost two years ago, but as we’ve learned since then, it’s virtually impossible to replicate the electric atmosphere you’ll find inside a stadium or arena packed with supporters.

Of course, the grand return of fans also helped fill a very noticeable void that formed in the wake of their exile concerning videos of ill-tempered spectators coming to blows over various disagreements.

I’m certainly not an advocate of resorting to violence to sort out any issues that might arise in your section over the course of a game. With that said, I’m not going to pretend I’ve never derived some enjoyment out of clips featuring drunk idiots getting their comeuppance and the other wild moments that can unfold when tempers flare—including an all-timer that surfaced out of Las Vegas over the weekend.

Following Saturday’s contest between the Golden Knights and the Oilers at T-Mobile Arena, a rumor concerning a prosthetic leg that was allegedly deployed as a weapon during an altercation started to make the rounds.

I’m hearing a prosthetic leg was used in a fight tonight at Tmobile arena. #vegas

It didn’t take long for that rumor to be confirmed, as someone managed to capture video of a woman ripping off her fake leg before swinging it at someone in the row behind her at some point during the contest.

Words can not describe how happy I am that what happens in Vegas no longer stays in Vegas.