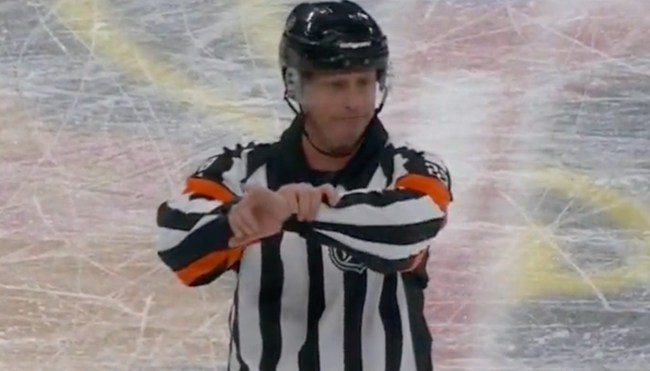 Last year, the NHL found itself with a bit of a scandal on its hands courtesy of referee Tim Peel, who was terminated after audio of him admitting he’d been searching for an excuse to call a penalty on the Nashville Predators was broadcasted to the masses.

While the fact that officials routinely hand out weak penalties to make up for earlier goofs or control the flow of the game is probably the worst-kept secret in hockey, Peel made the fatal mistake of saying the quiet part out loud, so it wasn’t a huge surprise the league made the decision to show him the door.

It didn’t take long for his former colleagues to begin to exercise a bit more caution to avoid befalling the same fate, but refs have still fallen victim to some less nefarious hot mic moments since then.

Earlier this season, Chris Rooney joined the club when he hit Haydn Fleury with a couple of f-bombs after the Kraken defensemen took issue with a tripping call.

During Thursday night’s matchup between the Blackhawks and the Blue Jackets, Chris Lee narrow avoided broadcasting a similar message over his microphone after sending Andrew Peeke to the box for a couple of minutes for holding.

The Columbus defenseman was not thrilled with that development, but Lee was equally displeased with his displeasure, as he appeared to tell Peeke to “Shut the f—k up” but managed to cut his audio off at the very last second.