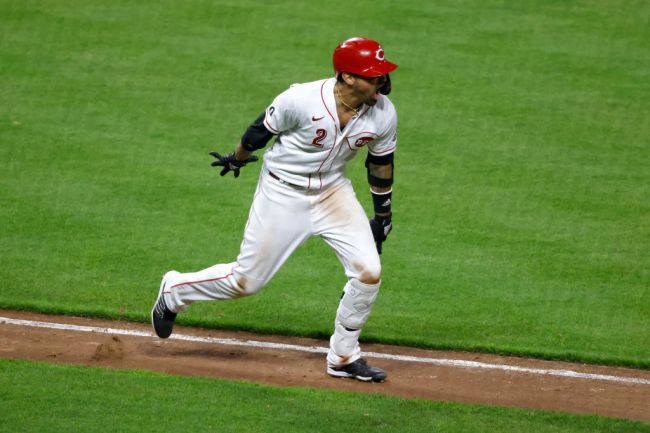 Nick Castellanos is the current bad boy of baseball and he added to his persona with an absolute bomb on Monday night, just hours after being suspended for two games by the MLB. Cincinnati’s 29-year-old right fielder is hitting .533 with three dingers and six RBIs through the first four games of the season. His hot start was being overshadowed by a skirmish he started over the weekend, but his third home run of the year made sure to set the record straight. He was LOUD with his bat flip and pimp job.

This overly enthusiastic celebration was a statement. On Saturday, a sequence transpired that began with Castellanos getting hit by a pitch and ended with No. 2 standing over the pitcher who hit him after he scored on a passed ball. He and St. Louis catcher Yadier Molina had words and the benches cleared for both teams from there. The league then slapped a two-game suspension for inciting the “brawl,” as well as an undisclosed fine.

Nick Castellanos is getting a 2 game suspension for this… soft ass league. pic.twitter.com/CI3SmUYXui

Castellanos’ punishment was more than any Astros player received for their “alleged” buzzer scandal and he plans to appeal the decision. Batting second in the lineup, the Florida-native made sure to get his money’s worth.

His 431-foot home run went DEEP into left field and came after Mike Moustakas hit one 431 in the inning before.

An absolute moonshot from Moose. 😳 pic.twitter.com/yfCxVDXP5u

Cincinnati went on to win 5-3, which was the cherry on top of Castellanos’ VERY deliberate, VERY arrogant first base trot. He let the MLB hear him.

This type of thing is what the game needs. Whether you’re a fan of Castellanos and the Reds or not, whether you love it or hate it, your reaction is only going to grow the game. Commissioner Rob Manfred and the league refuse to understand that the game needs to be fun. Castellanos slapping a tater and taking his time down the first base line is fun.