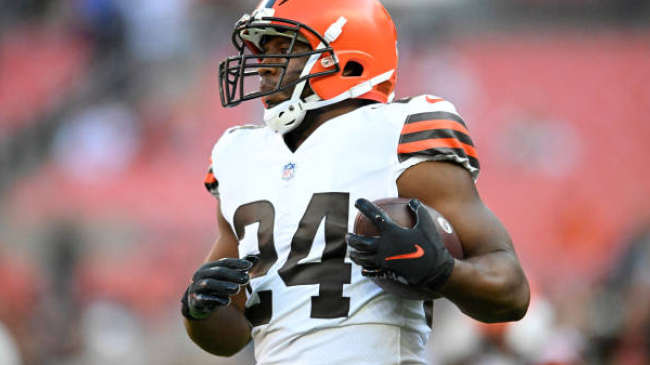 The moment football fans have been anxiously awaiting is almost here. We are only 4 days away from Baker Mayfield’s Week 1 revenge game against the Cleveland Browns.

Over the past couple of weeks, the drama around this matchup has only grown.

First, there was the situation with Baker Mayfield reportedly saying that he was going to “f them up” while discussing the Browns. He has since refuted the report, but it seems now the Browns want to make things a little more interesting.

Today, Browns running back Nick Chubb was asked what he expects from Baker in Sunday’s matchup and seemingly took a shot at his former quarterback. Chubb’s response was “We all know Baker, so I don’t know what to expect.”

Chubb on what he expects from Mayfield. “We all know Baker, so I don’t know what to expect.”#Browns

This is sure to be a bit of added motivation for Baker as he looks to get his career with the Carolina Panthers off to the perfect start.

Not only will he be looking to get a win in his first start with a new team, but he’ll also have the chance to deliver his last team a loss in there first game without him.

Vegas favors him to do so, listing the Panthers as 1.5-point favorites for their season-opening matchup. It’s easy to see why. While the Browns will be taking a downgrade at quarterback with jacoby Brissett, Baker will be playing with a much better supporting cast this season.

Neither of these teams gave fans much reason to tune in week after week, but it seems pretty likely that the Cleveland Browns and Carolina Panthers are going to have plenty of people watching on Sunday.