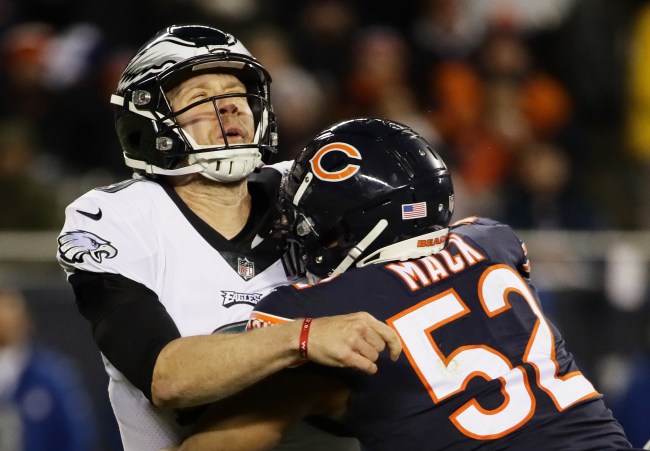 Nick Foles propelled the Philadelphia Eagles past the Chicago Bears and their #1 ranked defense in Sunday NFC Wild Card game. Foles threw 266 yards (25/40) with 2 TDs and 2 INTs. Along the way, Nick triggered a seven-figure bonus in his contract and emerged from Sunday’s victory a million dollars richer.

Ultimately, Nick Foles’ million dollar bonus was determined by Chicago Bears kicker Cody Parkey who missed a would-be game-winning field goal with 10-seconds left on the clock that would’ve given the Bears a 2-point lead and almost certain victory. Cody Parkey lined up to take the kick and drove it threw the uprights but the Eagles had iced him by calling a timeout. When Parkey kicked it for the second time he double doinked it off the uprights and the Bears lost in heartbreaking fashion.

Nick Foles was celebrating his ass off at this point thanks to a restructured contract that paid him two bonuses. The first bonus was triggered by Foles playing 33% or more of the snaps in a playoff game. The second bonus was awarded for a win.

This could be a $1 million drive for Nick Foles, who will get a bonus of $1M if the Eagles win today (he has already played in 1/3 of offensive plays, as required).

Nick Foles’ restructured contract this offseason pays him $500k for playing 33 percent of snaps in a playoff game — and another $500k for a win in that instance. And he’s walking around here all calm. I’d be spraying champagne from the 300 section of Soldier Field by now.

That 4th quarter drive which culminated in a 2-yard touchdown pass from Nick Foles to Golden Tate with 1:01 left on the clock was all Nick needed to secure his $1 million bonus. He’d already locked up the first $500K for playing more than 33% of the snaps but the win netted him another half million dollars.

In total, Nick Foles could’ve made up to $14 million this season if he hit all of his bonus marks but according to Bleacher Report, Foles came up a few snaps short in the Eagles’ season finale from triggering another million dollar bonus for playing time.

The #Eagles and QB Nick Foles agreed to terms on a $2M raise for 2018, source said, but he can earn much more. Foles can make up to $14M total in playtime, playoffs and Pro Bowl incentives. … He’s been paid a $3M roster bonus & signing bonus of $2M. He will make a $4M salary.

Any thoughts on where Nick Foles will be playing next season? Any chance he stays in Philly? At this point, I feel like he’s heading to the Jaguars who were arguably the biggest disappointment in the NFL this season. Currently, the Giants are the favorites to land Foles (11/5) with the Jaguars and Redskins close behind (4/1) followed by the Dolphins (5/1).