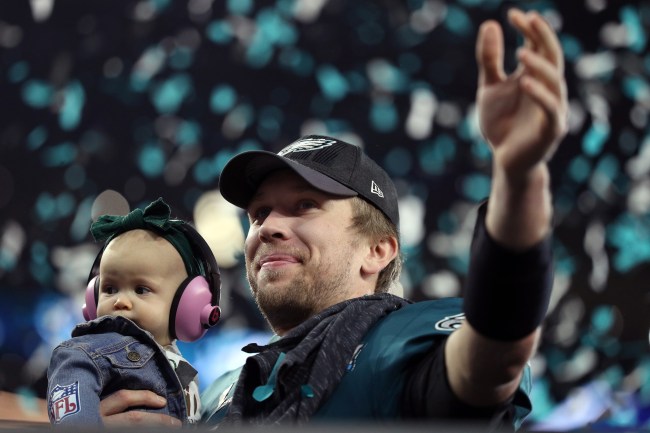 Nick Foles was fresh off the biggest win of his entire life–posting an incredible stat line of 28-of-43 passing for 373 yards, three touchdowns and a 106.1 passer rating. On Sunday, every time he stepped on the field, he won. And he did it against arguably the greatest quarterback to ever live.

But, in the post-game press conference, all the 29-year-old Super Bowl MVP could talk about was failing.

His speech far exceeded the customary thank you’s to players and coaches and the all-glory-be-to-God spiel. Foles opened up and in one of the greatest moments of his life, stepped back to reminded us all of a very important lesson: embrace failure. It tugged at my heart strings and I’m a Patriots’ fan. I was hoping for this guy to expose himself as an asshole so I felt vindicated in my pettiness after the loss.

I never got that.

This Nick Foles post game interview is a must watch! He is so on point. @nflnetwork. pic.twitter.com/MoIq25EqEn

The transcript of the speech below:

#Facts 💯 Embrace the struggle! Salute and congrats on that performance and Ring in the big dance @NFoles_9 pic.twitter.com/i4fq9QcSge

Remember that Nick Foles was cut by Jeff Fischer and the Rams prior to the 2016 season and considered retiring–“best of luck and I hope you land on your feet,” Fischer told him in a phone call captured for the world to see in an episode of Hard Knocks.

Less than a year and a half later, Foles took down Tom Brady and the Patriots to deliver the city of Philadelphia its first title in the Super Bowl era.

In the words of the great Yoda:

“Heeded my words not, did you? Pass on what you have learned. Strength, mastery, hmm…but weakness, folly, failure, also. Yes: failure, most of all. The greatest teacher, failure is.”