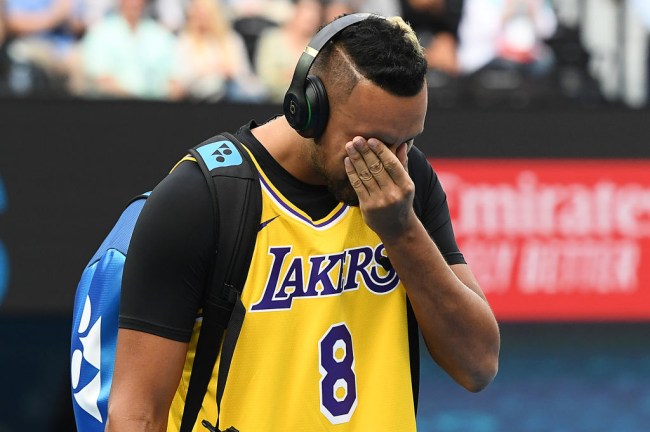 The passing of Kobe Bryant, his daughter Gianna and a reported seven other people on Sunday hit the sports world hard and affected millions of people in every corner of the world.

While many athletes around the globe paid tribute in their own ways, Nick Kyrgios decided to take the court in a No. 8 Kobe jersey ahead of his fourth-round match against Rafael Nadal at the Australian Open.

While he’s one of the most emotional tennis players on the planet, we saw a different emotion from the Aussie as he took the court in his home country. Getting set to play in one of the biggest matches of his career in front of an arena full of fans set to support him, he held back tears while wearing the Bryant jersey.

Kyrgios didn’t just walk to his bench and take the jersey off, either, he wore the jersey throughout his warmup session.

Nick Kyrgios walked out in Kobe's jersey and is wearing it while warming up pic.twitter.com/7SkSzFoKSi

Kyrgios wore a Kobe jersey during his post-match press conference as well. He’s often talked about how he doesn’t actually love the game of tennis and that his favorite sport is basketball.

“I never met Kobe but basketball’s practically my life, I watch it every day and I’ve been following it for as long as I remember … it’s tough, it’s horrible news,” he told CNN. “If anything it motivated me (during the game). If you look at the things he stood for and what he wanted to be remembered by I felt like if anything it helped me tonight. When I was down a break in the fourth I was definitely thinking about it and I fought back.”

Kyrgios lost his match to Nadal in four sets on what was an extremely emotional day for the 24-year-old.