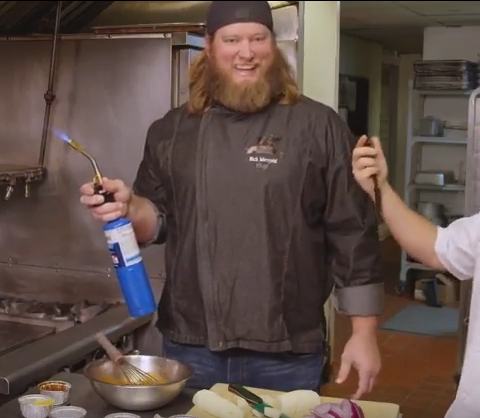 Nick Mangold Discusses Cooking with a Berzomatic, Toughest DL to Play Against and a Classic Hard Knocks Moment

Former Jets Center Nick Mangold is a self-proclaimed “foodie”. Nick recently partnered with NYC Chef Michael Ferraro from Delicatessen and Bernzomatic, to do a “Mangold vs. Food” segment. In a 90 second segment worth watching, Nick shows off a serious culinary game and the ability to name 14 different cuts of beef. We got a chance to ask Nick to name an unexpected dish you can use a Berzomatic torch on, the 3 toughest DL he faced in his career, in order and about a classic Hard Knocks moment.

JWS: Do you have any formal chef training?  Where did you learn (or who taught you) to cook?

Nick: I don’t have any formal training. However, I was my wife’s sous chef before kids and then I slowly took over the cooking to help out. My wife watches Rachael Ray, so she has been our main teacher.

JWS: In the video, you use the Bernzomatic torch on steak frites and ribs. Can you name a dish that requires the use of a torch, that people wouldn’t think to use one on?

Nick: For unexpected dishes, I like making Beef and Shishito Pepper Skewers. After you marinate and cook the skewers, you can use the Bernzomatic TS4000 to finish them off.  Also, not only can you whip up tailgating recipes with a torch, but you can also take a torch to desserts and cocktails, which is a new trend Bernzomatic has been telling me about.

Fan Marino: As a life-long Jets fan, the 2010 season of Hard Knocks (HBO) was of particular interest. In one episode, CB Antonio Cromartie revealed he had several children (if you don’t know what I’m talking about, watch). I mentioned to Nick that watching him try to name the various cuts of beef, reminded me of Cromartie trying to name all his kids. I had to ask him if the guys in the locker room gave Cromartie a hard time about his delayed response?

Fan: I was also curious to hear who the 3 toughest DL he played against were, in order?

Morgan Stanley’s 2018 growth forecast for Formula One auto racing (FWONK), projected a $187 million increase in broadcasting revenue. However, 42% of that total has since been called into question after one of the sources cited in the report (SportBusiness) issued statements contradicting several key assumptions. The report assumes FWONK “will see the bulk of their major markets step up with new (larger) TV contracts”, increasing the company’s broadcasting fees 31% YOY (to $785 million); but, SportBusiness is projecting rights fees in Spain (F1’s biggest market) remain flat and has noted Germany does not have a pay-TV operator in place for the start of the 2018 season. When asked if Morgan Stanley would be revising its report in the wake of SportBusiness’ comments, Head of Media Research Ben Swinburne said “these are our estimates, based on a variety of analysis and press reports. I am unable to comment on any potential future changes to our forecast.”

Howie Long-Short: FWONK shares spiked (to over $39) following the release of Morgan Stanley’s report, which included an increased price target ($47); but, the document clearly states that among the risks are “broadcast contracts renewed under less favorable terms.” Assuming SportBusiness projections are accurate, then Morgan Stanley greatly overestimated FWONK’s ability to increase revenue YOY. Shares have steadily declined since SportBusiness issued a statement on Friday, closing at $36.56 on Tuesday.

Fan Marino: F1 has announced it will be replacing its Grid Girls with Grid Kids for 2018 season, a move is designed to drive youth interest in the sport. Grid Kids will be selected by merit or lottery, by their local motorsport clubs; with all those participating actively competing in karting or formulae.

Dailymotion and Stadium have announced a syndication partnership that will enable sports fans to find Stadium’s sports highlights, original programming and daily studio shows on Dailymotion’s mobile application, desktop and OTT service. Dailymotion which aggregates high quality video content across the sports, news, music and entertainment worlds, also has syndication partnerships in place with CBS Sports, NESN & the UFC. Having launched just 100 days ago, Stadium is actively looking to expand distribution (Dailymotion has 300 million unique users per month); determined to bring its 24/7 sports content to fans, wherever they want to watch it.