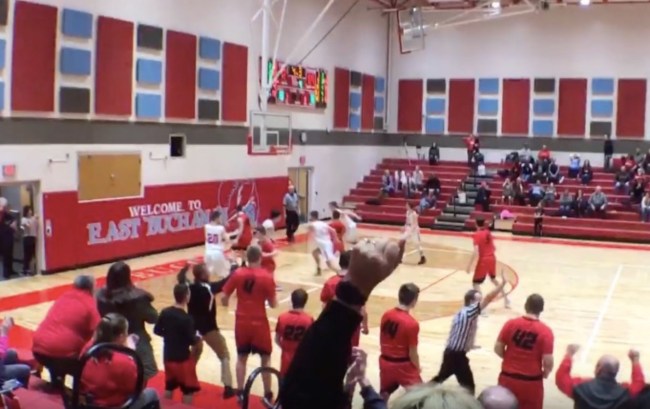 A high schooler from Iowa went OFF last week. Nick Reid shot his way into the record books when he dropped 76 points in a game, the second most points scored by an individual player in Iowa state history and the most since 1927.

Last week, Central City High’s Nick Reid scored 76 of his team’s 86 points in an 86-76 win over East Buchanan. He followed it up by only scoring 37 points in his team’s next game.

He’s 6’6″ and his stat line on the night was absolutely unreal: 76 points, 25-of-44 from the field, 24-of-27 FTs, 14 rebounds, 4 steals. The man was everywhere. And you can watch this quick clip that only shows his scoring. My suggestion is to watch it on 2x speed because it looks even more insane when sped up.

Kobe Bryant famously scored 81 points against the Toronto Raptors back in January 2006 in the second highest individual scoring game in NBA history. Wilt Chamberlain is the only NBA player in history to score 100 points in a game. Fans LOVE individual performances like this.

Until Nick Reid did it Monday night.

Nick Reid scored those 76-points a week ago during his team’s game last Monday. When the team played later in the week there was a Division-1 scout in the stands, a swarm of local media, and everyone was amazed by this 6’6″ player’s ability to score at any point in the game.

Nick’s coach had this to say about the selflessness that allowed Nick to drop 76 points in a game:

“Our role guys absolutely got the ball to the hot hand,” Carlson said. “No egos on our team. Selfless players, and I’m proud of them. Nick was hot, and they went to him time and time and time again. It’s a tough thing to ask 15 to 18-year- old kids to do that. So fun.” (via The Gazette)

76 POINTS. IN. A. GAME. THE GREATEST🔥 @SportsCenter @espn pic.twitter.com/uJT7aHeWlQ

Nick MOM scored 64-points in a game back in the 1980s. He said he really wanted to break his mom’s record because “she always gives me crap about it every day” and that’s exactly what he did. Destroyed mom’s record by 12 points and can now rub that in her face anytime she talks about her 64-point game in a 6-on-6 game back in the 80s.

For more on this, you can click here to visit The Gazette and read their full article about Nick’s historic achievement.