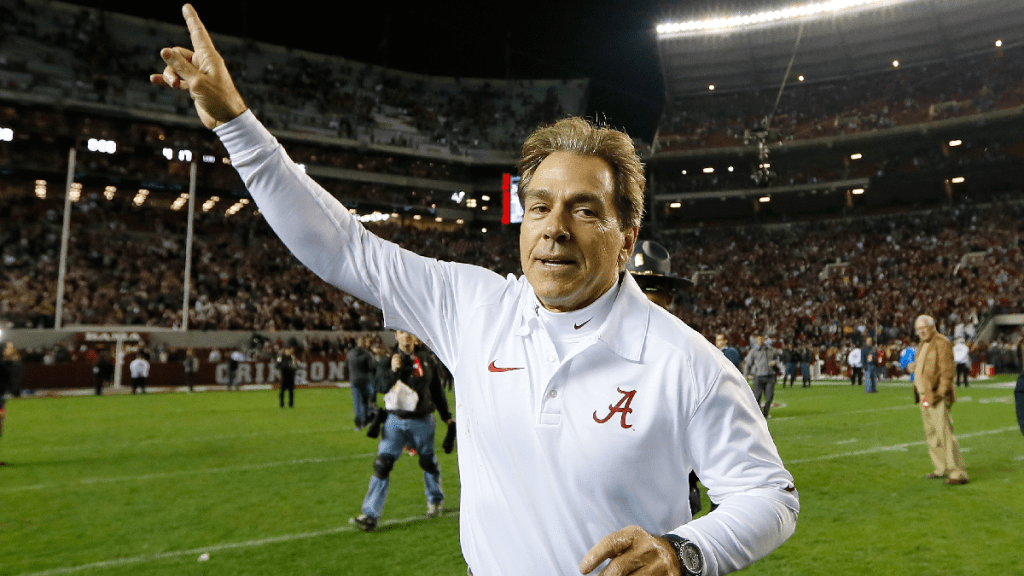 The Alabama Crimson Tide arrives in Austin, Texas for their game against the UT Longhorns as massive favorites to win the game. Nick Saban’s team is expected to beat Texas by over 20 points which signals a tough day ahead for the ‘Texas is Back’ crowd.

Nick Saban is easily the most famous college football coach in America and frankly, it’s not even close. There are plenty of big names in CFB coaching but the spotlight shines on Saban brighter than others.

The result of the media spotlight shining on Nick Saban 24/7/365 is we learn some interesting things about the man. For instance, he had no idea that the ‘Horns Down’ gesture against the Texas Longhorns is a penalty because it’s considered ‘taunting’. We also recently learned that Saban is a huge fan of the ‘relegation model‘ used in European soccer, and that he’s a whiz at cleaning a refrigerator.

We also know that Nick Saban has an incredible memory. Like a Lannister or Big Al, Alabama’s elephant mascot, Nick Saban doesn’t forget. He remembers the Crimson Tide were huge favorites last time they traveled to the state of Texas and they left with their tails between their legs.

Nick Saban Sounds Haunted By The Past Ahead Of Texas Game

When asked by reporters this week about being 20-point favorites against the Texas Longhorns, Nick Saban recalled his team’s last trip to Texas where they faced Texas A&M as 20-point favorites. He had this to say:

Nick Saban on being a 20-point favorite against Texas:

“The last time we were 20-point favorites and we went to Texas, we got our ass kicked."

If that tweet didn’t load, Saban’s full quote was:

Coach Saban’s Crimson Tide were 20+ point favorites against Texas A&M on October 9th of last season. They ended up losing that game 38-41.

If the Texas Longhorns beat Alabama the College Football World will lose its dang minds. It’s probable the City of Austin would turn into the biggest party on planet earth overnight.

It’s hard to imagine a scenario where Texas does beat Alabama but anything could happen. And looking further into the season, Texas A&M will travel to Tuscaloosa on October 8th to face Nick Saban’s team. The Aggies are currently the #6 ranked team in the nation (Alabama is #1). That could be one of the most-watched CFB games in years if both teams make it to that game undefeated.