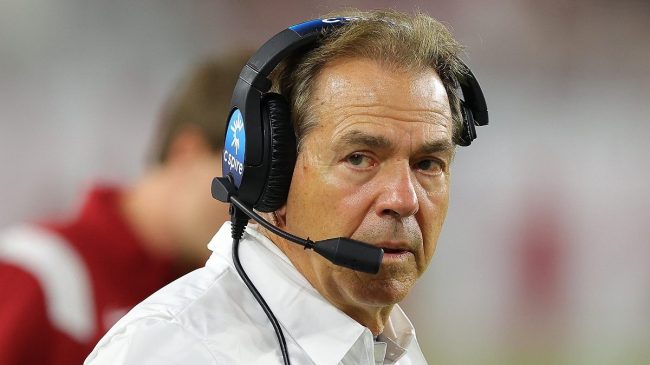 In what should be one of the biggest college football matchups, the Alabama Crimson Tide is taking on the Texas Longhorns in Austin. All eyes are on this game, as we have two solid football programs going head to head. However, head coach Nick Saban learned a rule that he apparently wasn’t aware of and his reaction is rather hilarious.

During an interview with the media, someone asked Saban about his thoughts on the penalization for any player who does the “Horns down” gesture. Immediately after getting asked, you can see Nick Saban’s face turn into confusion. Pat Dowd is right, the media may very well have just saved Alabama a 15-yard penalty in Saturday’s game.

Nick Saban was not aware of the “Horns down” gesture being a penalty.

The media may have just saved Alabama 15-yards. pic.twitter.com/1Aj4i0wKy7

Some speculate that the Crimson Tide head coach is well aware of the rule and is just having some fun with a media member. However, there is nothing indicating that to be true. Based on the video, Nick Saban looks genuine with his baffled response.

To be fair, this rule is only implied in the Big-12. Considering Alabama plays in the SEC, there is no real reason for Nick Saban and the Crimson Tide to know the rule. Regardless, it’s hard to imagine a Saban-led team taunting their opponents.

In the end, he seems grateful for the media member to bring it up during the interview. A part of us wishes Nick Saban never knew though. Could you imagine an Alabama player throwing the “Horns down” gesture and getting flagged for it? The Alabama head coach would absolutely lose his mind on the sideline while his team is up by 40… Sorry Texas fans.