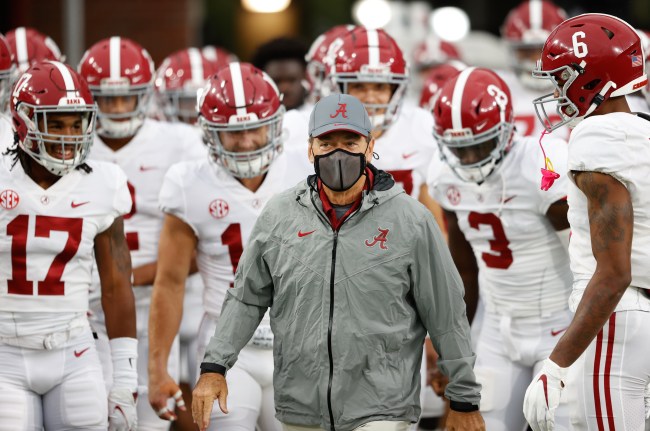 On Wednesday, Alabama announced that Nick Saban had tested positive for COVID-19 but fast-forward to Saturday, just four days later, and the head coach has been cleared to coach the Crimson Tide for their massive matchup against Georgia.

Saban has continued to be asymptomatic and returned his third consecutive negative test on Saturday giving him the green light to coach against the Bulldogs. Saturday’s test was actually flown to an SEC-approved lab in Mobile, Ala. for a quick turnaround. The school said the initial positive test from Wednesday came from an outside lab that the school uses to supplement the SEC’s mandated testing.

“Due to the fact that Coach Saban has remained completely symptom-free and had five negative PCR tests, split between two separate labs, the initial test from Wednesday is considered a false positive under the SEC protocols,” Alabama team physician Dr. Jimmy Robinson said per ESPN. “… In accordance with the SEC Return to Activity and Medical Guidance Task Force Protocol and with the approval of The University of Alabama System Health and Safety Task Force, Coach Saban is medically cleared to safely return to activity effective immediately.”

This is obviously huge news for the Tide getting their head coach back on the sideline as they welcome the No. 3 team in the country to Tuscaloosa on Saturday night.

Saban explained on ESPN’s College Gameday on Saturday morning that Alabama underwent 240 tests on Thursday and Friday and had zero positive results.

It’s worth noting that if Saban hadn’t received his third straight negative test or developed any symptoms, he wouldn’t have been allowed to have any contact with his team prior to or during the game remotely. An NCAA rule in place would have prohibited Saban from communicating with his team or any of his coaches beginning 90 minutes prior to kickoff until the end of the game.