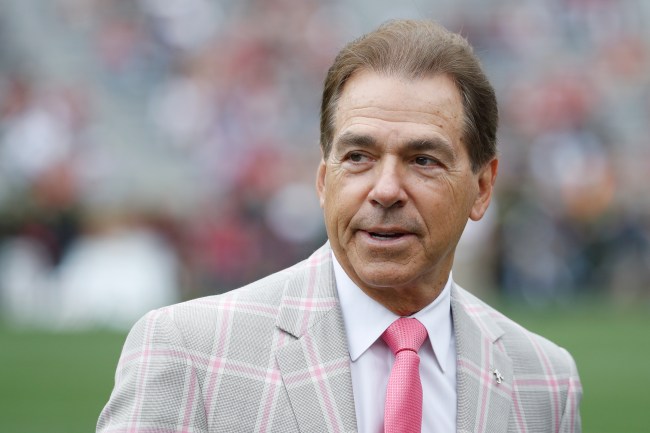 Nick Saban’s the greatest college football coach ever, and he wants to make sure that he adds to his legacy by coaching lots and lots more years. That’s one of the reasons why the Alabama Crimson Tide head coach decided to get surgery earlier this week to repair a cranky hip, saying, “I don’t want to coach for one more year — I want to coach for a lot of more years.” You heard it from the horse’s mouth, college football world, so the wrath of Nick Saban and the Tide isn’t going anywhere anytime soon.

As much as Nick Saban loves winning, er, dominating at college football, the dude apparently shows quite the affection for playing golf, too. But Saban couldn’t possibly be comfortable out there swinging the sticks with a hip that was giving him problems, which is why he wanted to take care of the injury STAT, in order to get back on the links. In fact, he even played a round of golf in Florida just hours before his hip surgery in Alabama, saying he took a private flight straight from the course to the surgery room.

“I scheduled it in the afternoon because I wanted to play 18 holes (of golf) before I went in,” Saban said on Wednesday. “So I played 18 in the morning, flew back from Florida and checked in.”

If you want to talk about a power move, that’s it, right there, because Nick Saban’s not letting some hip surgery get in the way of his round of golf. What’s even better is that the doctor who performed the procedure, Dr. Benton Emblom, sounded encouraging with how the operation may help Saban’s golf game.

“Coach Saban underwent successful robotic assisted right hip replacement surgery this afternoon with our hip specialist, Dr. Benton Emblom and the team at Andrews Sports Medicine. Coach is resting comfortably and we anticipate a full recovery. He should be able to return to work in the very near future, and we’ll have him back out on the golf course, with hopefully a few more yards off the tee, as soon as possible.”

Oh, and if you want to know what separates being good from being great, listen to this: Nick Saban missed one day of work after the hip surgery, saying he tossed out the walker the day after the operation and decided to just go with the cane. Again, another BDM by the Tide head coach.

“I did some rehab at home (on Tuesday) and threw away the walker after one day,” Saban told ESPN. “I’ve got a cane, and I’m rolling now.”

Nothing gets in the way of Nick Saban and building a college football dynasty, playing golf and, well, walking like an OG with a cane. Dude might be hard on his players, but following his lead would be a good idea, because he’s a complete badass.