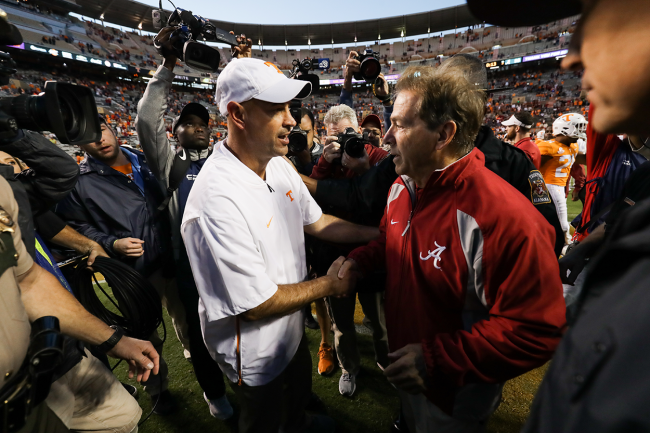 Jeremy Pruitt is in hot water at the moment. The 48-year-old former head coach of Tennessee football received his Notice of Allegations from the NCAA last week and both he and his wife are directly implicated with alleged illegal payments to recruits.

Prior to taking over the Volunteers in 2018, Pruitt served as the defensive coordinator at Alabama in 2016 and 2017. He also spent time with the Crimson Tide from 2007 to 2012 as the director of player development and defensive backs coach.

During both of his stints in Tuscaloosa, Nick Saban was the head coach. As a result, Pruitt is extremely familiar with the greatest head coach in college football history.

He recently provided an inside look at what it is like to be in a meeting room with Saban that is exactly what you might expect. And a new story from John Talty’s book ‘The Leadership Secrets of Nick Saban: How Alabama’s Coach Became The Greatest Ever’ gives another taste of life with/around the head coach of Alabama.

Talty recently shared the anecdote on Pruitt’s behalf and it involves fried chicken.

As the story goes, Pruitt and Saban were out on the recruiting trail. They needed something to eat and the former suggested that they stop at Zaxby’s, a fast food chain that is mostly in the Southeast and serves chicken wings, chicken fingers, chicken sandwiches, and chicken salads.

Saban had no idea what it was, so he turned to Pruitt and asked “what the fuck is a Zaxby’s?”

In response, Pruitt had an interesting description that is objectively a stretch.

So now Pruitt, a man who famously didn’t know what asparagus was on national TV, has to explain to Nick Saban what a Zaxby’s is.

He decides on, “It’s like a classier Chick-fil-A, Coach.”

Which, no disrespect to Zaxby’s, is not the description I would have gone with.

If you are unfamiliar with Pruitt’s lack of knowledge on asparagus, he was once clueless about the very common and well-known vegetable on the MTV show ‘Two-A-Days.’

It all came full-circle, kind of.