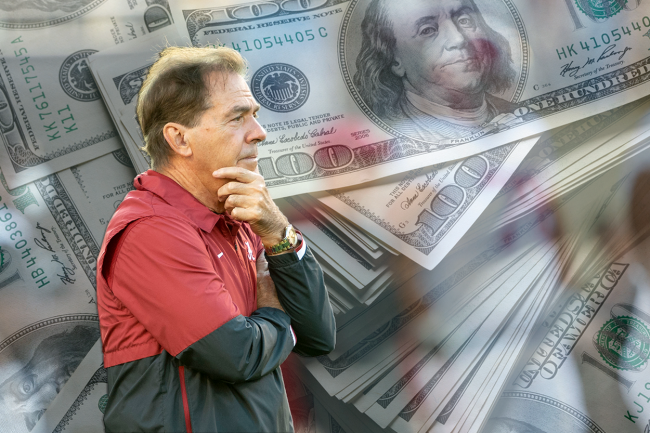 When the NCAA introduced its new rules on Name, Image and Likeness last summer, the entire landscape of college sports was flipped on its head. In particular, college football has seen a lot of change in operations.

Where schools had to offer players money illegally under the table in the past, there is a way for it to be done legally in the current era. Kind of.

Offering a player money in direct return for a commitment to a particular program remains illegal. However, through NIL, there is a legal way to leverage finances to current players, transfers and recruits.

An interested prospect can be made aware of a deal or deals that could be paid out upon his enrollment at a particular school. All of the deals are supposed to be signed after a recruit enrolls, but there are workarounds involving a lot of trust to get a deal done before that happens.

As recruits make a decision on where to continue their college careers, boosters and fans can pump money into a fund or collective around a specific program. That money can then be allocated for a specific recruit, should he choose to commit.

Rather than making it a when, it’s an if, which keeps it barely within the grey area of legality. Thus, there are legal ways for college football programs to indirectly recruit with money.

Nick Saban has a warning about Name, Image and Likeness.

Among the many coaches who have been vocal about their concerns with NIL, Saban has been adamant that it is a good thing. He sees the value for the players and he understands the positive element of compensating players for their product.

The Alabama head coach is concerned about how it is being used as a recruiting tool.

As he, Lane Kiffin and others have said before, college football has what is now essentially a form of free agency. Saban has already given a very strict warning about NIL in the past that sounded a lot more like a threat than a caution.

During a recent interview with the Associated Press, Saban criticized the current state of college football and called on the leaders to make swift changes. Once again, it sounded more like he was making a threat.

It was almost as if to say that if the leaders don’t make a change, then he and Alabama are going to take full advantage of the rules that are presented to them, which is a dangerous game.

Here is what Saban had to say about NIL:

“But that creates a situation where you can basically buy players. You can do it in recruiting. I mean, if that’s what we want college football to be, I don’t know. And you can also get players to get in the transfer portal to see if they can get more someplace else than they can get at your place.”

Kiffin, who previously worked alongside Saban and now competes against him on the field once a year, has compared college football to the NFL in the past. Saban agrees.

“We now have an NFL model with no contracts, but everybody has free agency,” he said. “It’s fine for players to get money. I’m all for that. I’m not against that. But there also has to be some responsibility on both ends, which you could call a contract. So that you have an opportunity to develop people in a way that’s going to help them be successful.”

“So there’s going to have to be some changes implemented, some kind of way to still create a level playing field,” he said. “And there is no salary cap. So whatever school decides they want to pay the most, they have the best chance to have the best team. And that’s never been college football, either.”

“We give everybody the same medical care, academic support, food service. Same scholarship. So if we’re going to do this, then everybody is going to benefit equally. I’m not going to create a caste system on our team.”

Despite his concerns, Saban isn’t worried. He knows he and his team are going to adapt just fine. He wishes things were different, but he isn’t going to play the game differently than everybody else and that’s a scary thought for the rest of college football.

“I know we have to adapt to that,” Saban said. “You’re going to have kids out there that say, ‘Well, I can get a better deal going someplace else,’ and they’ll go there. But you’re also going to have people that see the light and say, ‘Yeah, they’ve got a good history of developing players. They got a good history of developing people, they got a great graduation rate and that value is more important. And they’re distributing money to everybody in the organization.”

Ultimately, the last time that Saban asked if “that’s what we want college football to be,” it came about the evolution of offense.

It was a warning, not a complaint.

In response, Alabama ditched the ground-and-pound, adopted a hurry-up, spread offense and won three national championships in six years. This appears to be Saban’s last warning about NIL and everybody knows what that means.

He might as well be saying “You want to drive up the price in an NIL war? Alright, well, remember this moment when I use it against you.”