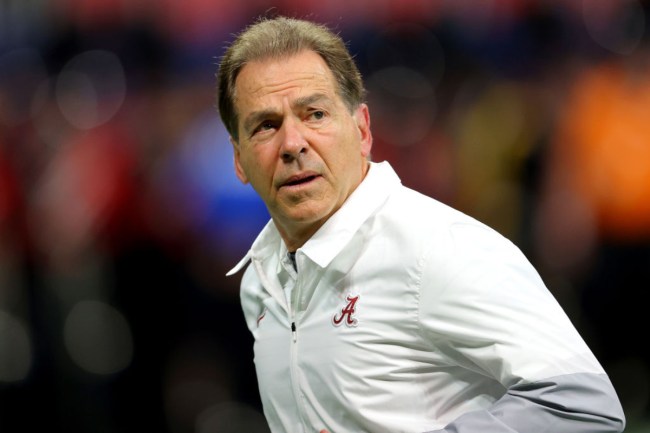 While Alabama should be as comfortable as a team could possibly be heading into its semifinal game with Cincinnati, this year is obviously different with teams dealing with protocols and trying to avoid the virus at all costs.

If a team isn’t able to field a full team it may be forced to forfeit their game therefore teams are being extra cautious in every situation they can be. For Alabama, that means staying inside the team hotel in Dallas ahead of its game against Cincinnati.

Saban shared with the media on Wednesday that it was actually the players’ decision to stay inside the team hotel.

While delivering the news, Saban also shared the message he sent to his team, and it’s classic Saban in the best way possible.

“You’re not gonna remember what you did on Tuesday night in Dallas three months from now, three weeks from now or three years from now. But you’ll remember for the rest of your life what happens in the game,” Saban said, according to Charlie Potter of 247Sports.

So, what do the players do while posted up in the hotel? According to wide receiver Cameron Latu, they’re simply watching film and chilling.

“We watch film and bond as a team,” Latu told Touchdown Alabama Magazine. “We are getting ready for the game. Getting ready to win, that’s fun.”

Alabama Is Locked In

Saban’s message surely has his team and Alabama fans more fired up than ever to take on the Bearcats.

It’s been clear for quite a while that Saban’s group has completely bought in heading into the Playoff.

Earlier this week, Alabama linebacker Will Anderson explained that the Tide feels like it’s the actual underdog in the game against Cincinnati despite being 13.5 point favorites.