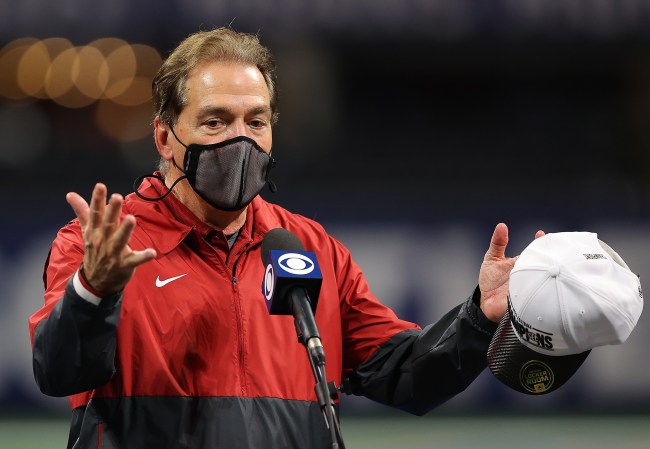 Look, I know that Nick Saban’s a GAWD in Tuscaloosa because of all that he’s accomplished for the Alabama football team, but you’ve got to be some kind of person to publicly humiliate a colleague for unintentionally referring to the six-time national champion head coach as simply “Nick” when addressing him in a press conference. Like, really, there’s prick level, and there’s whatever level up from there that sports anchor Rick Karle falls in.

His name is Coach Saban.

Not Nick.
Not Saban.

For those who may have missed it, during Saban’s press conference leading up to Friday’s College Football Semifinals matchup against Notre Dame, a young reporter from Karle’s WVTM 13 station simply addressed Nick Saban as “Nick,” rather than the “Coach Saban” that most media folks refer to him as. Oh, that set Karle off, and led to a lengthy Facebook post blasting the culprit. Just take a look at the B.S. the dude spewed to try and make his point.

Guys, Rick Karle was so upset with the young reporter that he really wrote 621 words in a Facebook post to state his case. He publicly humiliated his colleague for… what reason? Like, I’m still trying to figure it out. He couldn’t have just pulled her aside and quietly said something like, “you know, it’s not best practice to call Nick Saban just ‘Nick,’ so you may want to reframe your delivery next time you have the opportunity to interview him.” If I’m a young reporter and hear that from a sports media vet, I listen. I take it to heart and make the change the next time I see Bama’s head coach. Hell, I may even contact Saban to apologize — just in case he found it disrespectful.

But Karle needed to take things to a whole new level by calling out the reporter on Facebook, list a ton of personal times he’s spent with Nick Saban — which is a dick move in and of itself, as if he’s saying he knows him better — and then belittle his colleague more by giving a bunch of examples of who can and can’t call Saban by his first name. Ridiculous.

Not only did Karle post such a message, but as of press time, nearly 4,000 people actually liked it. That’s nearly 4,000 people who are brainwashed into thinking calling a man by his last name is disrespectful. Or that, because Saban has six national title rings he should be held to a higher standard when addressed by a reporter.

Guys, Rick Karle even goes as far as saying we should all “make a New Year’s resolution to address the greatest coach in the history of college football as ‘Coach Saban'” — what the hell is this dude smoking? I swear there are more serious problems in the world.

It sounds like Karle has a serious man crush on Saban. Maybe the Bama head coach will let the veteran sports anchor wipe his ass the next time they get together as he mutters the words “Lord Coach Saban” to his savior.