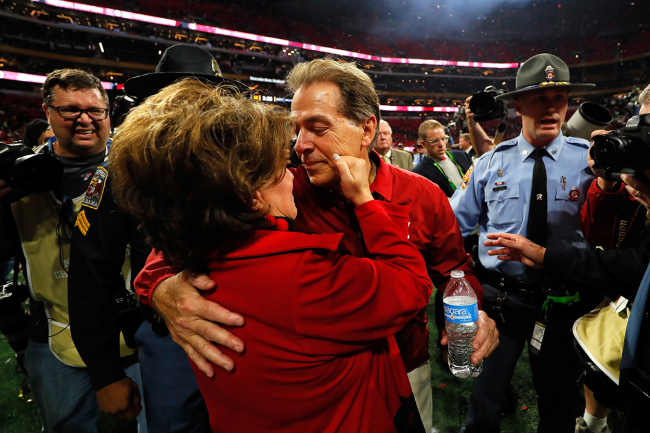 Find someone who celebrates your successes like Nick Saban’s wife Terry. After Saturday’s heart-racing Iron Bowl win, she was the first to greet her husband in the tunnel and could not have been more excited.

Terry Saban, better known as Miss Terry, is the First Lady of Alabama football. Nick Saban is the Commander in Chief, leading the Crimson Tide out to battle each weekend, while Miss Terry keeps the ship afloat.

She not only gets forwarded every single one of her husband’s emails, but she is also copied on each email that he sends. Miss Terry also often hosts top recruits and families into their home, plays a big role in Alabama’s A-Day, and perhaps most importantly, she keeps Saban in line.

For example, after her husband snappped at Maria Taylor after a victory in 2018, Miss Terry told him he was in the wrong. Saban apologized shortly thereafter.

And when Saban had a hip surgery and was forced to rest, Miss Terry kept him true to his recovery. When she came home to find Saban standing in the driveway one after noon, she made him get back in his chair and didn’t let him get back up. She even offers suggestions in terms of on-field play, and always chooses violence.

Needless to say, he would be significantly more lost without Miss Terry.

Saban has even said so himself. They have a great relationship and love one another very much.

That was clear on Saturday night after the Crimson Tide squeaked out a win over Auburn in overtime. After Saban wrapped up what he had to do on the field, he headed straight toward the locker room where Miss Terry was eagerly waiting for him, proud as could be.

Honestly goals are finding someone who gets as happy for you as Mrs. Terry did for Coach Saban 🥺 pic.twitter.com/AFzkcfsxrz

Not long thereafter, Saban went and addressed his team. Surely, there will be a lot of things to fix come time for the film session and practice. But last night, after beating their in-state rivals in the fourth overtime, it was all celebration.

Saban, in the middle of it all, was getting down with his guys in the locker room.

With the win, Alabama secured (at least) an 11-win season for the 11th-straight year. Absolutely insane.